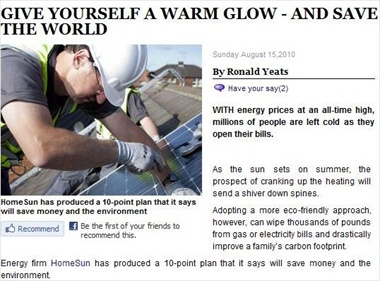 NEWS STORY? The Sunday Express published a two-page advertisement for solar energy company HomeSun. The problem was a few pages later, a supposed "news story" even hawks HomeSun's services, going so far to claim that families can save money and reduce their carbon footprint by switching to HomeSun. Screen shot detail above shows the beginning of the news story by Ronald Yeats. (Credit: The Express)

The UK Sunday Express seems to have crossed the line separating advertising and editorial with its August 15 coverage of solar power company HomeSun.  The Daily Express has a circulation of 745,000, according to the Mondo Times.

Roy Greenslade of The Guardian spotted that a few pages after a two-page advertisement for HomeSun,  The Express featured a very favorable article further promoting HomeSun.

StinkyJournalism agrees that the news story by Ronald Yeats, “Give yourself a warm glow,” read like a press release mirroring sentiments in the advertisement.

The supposed  “news story” even hawks HomeSun’s services, going so far to claim that families can save money and reduce their carbon footprint by switching to HomeSun.  The Aug. 15 news report not only provides prices for different HomeSun plans but also allows HomeSun’s chief executive and a company spokeswoman to promote their services within quotations.

Greenslade accuses The Express of using a fake byline with the news story because when he called Express’s magazine group, the Northern & Shell Network the switchboard didn’t have a listing for Yeats.  However, prior to the HomeSun puff piece, Yeats wrote May 9 a brief article about the mourning of a 22-year-old woman who had been strangled and killed.  Our search of his name on The Express’ website shows at least a dozen articles with Yeats’ byline.

Before the Aug. 15 advertisement and accompanying “news story,” the Express ran an Aug. 6 news story by Donna Bowater which also presented HomeSun as a successful, in-demand company.  It featured numerous quotations from HomeSun reporting massive interest in the company.  “Energy firm HomeSun has been inundated with thousands of inquiries about solar power systems as Britons consider generating some of their own electricity at home,” Bowater wrote.

The Aug. 6 news story claimed that an Aug. 5 article about HomeSun published by the Express resulted in “more than 10,000 readers” visiting the HomeSun website and 7,000 telephone inquiries.  The Aug. 5 article by Adrien Lee sang the praises of solar energy and promoted a giveaway of 100,000 solar power systems.

“From today a British company, HomeSun, starts giving away the first of 100,000 solar power systems to anyone with a decent-sized south facing roof. A staggering 2.5 million homes could be eligible in this £1billion giveaway set to run for three years,”  The Express’s article reads.

UK social media marketing agency Further reported April 22 of this year that it had received an e-mail solicitation from The Express’s parent company offering to sell them advertorial space on The Express or its sister sites The Daily Star and OK for 1,000 pounds per article.  See the solicitation e-mail on Further’s website here.

In August 2009,  the Guardian reported that The Daily Express was “censured for [the] fourth time in two weeks over undeclared advertorials” by the UK’s Advertising Standards Authority.

The U.S. Society of Professional Journalists advises that journalists “distinguish news from advertising and shun hybrids that blur the lines between the two.”

StinkyJournalism has written to The Daily Express asking for confirmation of the two-page advertisement, more information on Ronald Yeats’ affiliation with the newspaper, information regarding The Express‘ relationship with HomeSun, and asking about Further’s claim that The Express‘s parent group attempted to sell SEO links.