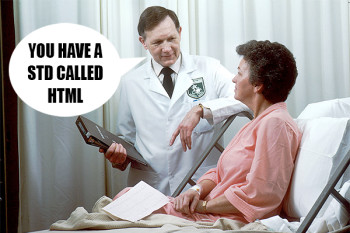 The Los Angeles Times reported today on a UK coupon website’s survey of Americans saying that 1 out of 10 Americans thought HTML is a STD (sexually transmitted disease).

From there, several news sites including Time, BuzzFeed and Talking Points Memo reported on the survey. But where is the survey? It’s not linked to the Los Angeles Times website and it doesn’t appear to be on the coupon website, Vouchercloud, any longer.

After a little digging into websites for the coupon and its publicity firm, which sent a press release about the survey to the Los Angeles Times reporter, iMediaEthics found cause for concern. Vouchercloud’s publicity firm, 10 Yetis PR, lists its work in viral marketing and stunts on its website.

The Los Angeles Times not only didn’t publish a link to the survey, but its reporter told iMediaEthics that he didn’t actually see the survey that served as the basis of his article.

So is there even a survey? There may be a survey and it just may not be published anywhere for some odd reason. But, why did the media publish a report on a survey that wasn’t seen? Instead of some hard data, just a few results of the alleged survey were provided via a press release from a firm that admits on its website it will create “fake protests and flash mobs.”

The 10 Yetis PR website reads, in part, “From reverse graffiti and environmentally friendly placement of your brand, through to fake protests and flash mobs, if you need help in this area, 10 Yetis PR is the company for you. Our in-house web development team are (sic) at the forefront of technical innovation. From mobile and tablet PC applications through to flash viral games and microsites designed to help you engage with your audience, we can help.”

A screenshot of a Google search for 10 Yetis. Highlights added

“A recent study found that many Americans are lost when it comes to tech-related terms, with 11% saying that they thought HTML — a language that is used to create websites — was a sexually transmitted disease.

“The study was conducted by Vouchercloud.net, a coupons website, as a way to determine how knowledgeable users are when it comes to tech terms.”

The story included quotes from “a company spokeswoman” in a “statement” and said that the survey studied “2,392 men and women 18 years of age or older.”

iMediaEthics asked the Los Angeles Times reporter, Salvador Rodriguez, if he spoke with the company or saw the survey.  Rodriguez told iMediaEthics by e-mail, “I was contacted by 10 Yetis Public Relations who sent me a press release about the survey that included all of the information I used in the report. ” He confirmed that he only saw “the press release they sent me” and not a copy of the survey.

Other sites that reported on the study, all crediting the Los Angeles Times for the survey, include:

iMediaEthics has written to the four  news outlets above asking if they saw the study.

Media blogger Jim Romenesko also reported on the Los Angeles Times article, calling it the “headline of the day.”

This isn’t the first time the public relations agency has promoted a survey for Vouchercloud.  Last year, several news outlets including the Daily Mail, the Independent and the UK Times published reports on a Vouchercloud survey finding that “one in six 18-30 year olds have never been to their local branch bank.”

10 Yetis published several clippings of its promotion of the survey. But, again, where is the actual survey that they cited? The online versions of news stories on the survey don’t link to any survey.

iMediaEthics reached out to Vouchercloud’s PR person by e-mail this afternoon but received an out of the office for the day response. iMediaEthics has asked 10 Yetis for a copy of the study. We’ll update with any response.

UPDATE: 3/4/3014 10:24 PM EST: This appears to be the press release promoting the study. It was published today on document posting Scribd by Matthew Keys. The press release doesn’t include any link or more details about the study, just some of the information picked up by the Los Angeles Times.

UPDATE: 3/5/2014 10:50 AM EST: BuzzFeed has posted the following update on its article about the study, following our article’s publication.

“Update: Some have called into question the validity of this study. You can read a copy of the press release here. BuzzFeed has reached out to Vouchercloud’s team for further clarification on how the survey was conducted.”

“Update: iMediaEthics has pointed out that the PR company responsible for sending out this release has been involved in viral publicity stunts before, so the validity of the study may be questionable–we’re working on figuring out more. Here’s the original press release for your perusal. We’ve reached out to VoucherCloud for clarification and will update if we hear back.”

UPDATE: 3/5/2014 2:12 AM EST: Matthew Keys told iMediaEthics by e-mail how he tracked down the press release. After seeing the Los Angeles Times article, he raised similar questions about the study:

Did journalists bother to email VoucherCloud and ask for this study, or is everyone arbitrarily sourcing the LA Times in their aggregation?

Keys noted that he also was unable to find the study on VoucherCloud’s website or any other website and “thought this was odd.” He received a copy of the press release from VoucherCloud after asking for the study.

UPDATE: 3/5/2014 2:30 PM EST: The Los Angeles Times has published an update responding to our questions in this story. The update reads:

“Updated 9:40 a.m. PST, March 5: The origin and veracity of the survey have come under question by a journalism ethics website. The firm that conducted the survey, 10 Yetis Public Relations, said it stands by its work and has provided the full survey results. The survey is “100% genuine, and it’s a valid survey,” said Leanne Thomas, a senior account executive for 10 Yetis Public Relations. Thomas said the survey was conducted over email over the course of seven days. She said participants of the survey were given no incentive to respond.”

Instead of knowing when to fold ’em, the Los Angeles Times doubled down on its wonky survey story.

Instead of identifying the survey as entertainment and not scientific, they have quoted the PR firm’s defense that it’s a “valid” survey.

What’s incredible is not only that the Times did not fact check the survey before publishing, but after they got in trouble, they AGAIN don’t fact check a second time. Instead of contacting an independent expert source, such as a scientist or a professional pollster, the Times backs the PR firm by providing it with ANOTHER crack at promoting its apparently non-scientific poll that it did not check in the first place.

So where is the method statement for the survey? Simply saying the poll is legitimate does not make it so, unless a scientific sample of the survey is provided.

iMediaEthics is verifying with the American Association for Public Opinion Research  (AAPOR) what a scientific poll is comprised of and what needs to be disclosed to the public. We have asked our polling director, who is out of the office today, for comment about the survey. Our email to the LA Times asked why it didn’t get independent verification of the poll or the methods statement.

AAPOR has a campaign regarding the problem displayed in this story. Their transparency initiative cites the need for all surveys to make their methods public.  iMediaEthics supports this initiative.

Fishbowl NY’s Richard Horgan has similar concerns, writing about the LA Times update: “LAT reporter Rodriguez has now added the work he should have done all along.”  Horgan went on:

“The quality of the answers begs further questions from our end: what was the U.S. geographical distribution of the respondents?; what was the age-range breakdown of respondents?; is there any estimated margin of error?; and how were respondents properly confirmed as being U.S. residents?”

iMediaEthics wrote again to 10 Yetis PR for comment and for the methodology.

UPDATE: 3/5/2014 4:57 PM EST: AAPOR’s Standards Chair (2013-14) Courtney Kennedy told iMediaEthics by e-mail that AAPOR’s code of ethics calls for all surveys to provide methodology. “We believe all research professionals have to uphold the credibility of survey research,” she wrote of the code’s guidelines.

“When results from a survey are publically released, the releasing entity has a responsibility to disclose a number of important methodological detail including the sampling frame, a description of the sample design, and any weighting procedures used,” Kennedy explained. “In my review of materials that you sent, I did not see these elements reported.”

Specifically responding to the HTML survey information as published by the LA Times today, she raised several “critical questions about the statistical integrity of the survey.”

Kennedy said, “Without answers to these questions one cannot evaluate whether the survey can credibly be used to make inference to the entire US adult population.”

The code of ethics’ standards of disclosure can be read in full on AAPOR’s website.