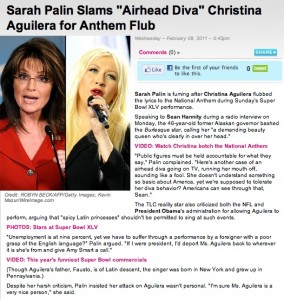 US Weekly has removed the above story based on a satire piece from its website. (Credit: US Weekly, Gossip Cop)

Both US Weekly and TIME apparently were hoaxed by a satire article claiming Sarah Palin called out Christina Aguilera for messing up the lyrics to “The Star Spangled Banner” during her Super Bowl performance.

Gossip Cop busted US Weekly for publishing information from a satirical article as news. The US Weekly story, “Sarah Palin Slams ‘Airhead Diva’ Christina Aguilera for Anthem Flub,” claimed that Palin bashed Aguilera as a “demanding beauty queen who’s clearly in over her head.”

According to Gossip Cop, the fake comments attributed to Palin are originally from SuperTuesdayNews’s Feb. 7 satire article.

The “About Us” page for SuperTuesdayNews explains: “Super Tuesday News is a satirical news site launched in January 2011 to lampoon the events, circumstances and players of the 2012 United States presidential election.  We are based in Los Angeles, California.”

US Weekly has since scrubbed its website of its article; however, a search of the website for Aguilera and Palin’s names produces a dead link to the article.

“We were as surprised as anybody when Us Weekly reported one of our stories as fact.  What we wrote, we wrote as satire.  The Onion doesn’t explicitly state that what they do is satire; neither do Stephen Colbert and Jon Stewart.  Even the most cursory visit to SuperTuesdayNews should make it clear that we are blatantly, and admittedly, a fake news site.  We did not intend for our story to be taken as fact by the media or anyone else.”

Gossip Cop commented: “It boggles the mind that a major outlet could read these obviously satirical, fake quotes and treat them as the real deal.”

US Weekly published a correction and apology owning up to having “erroneously published a story attributing quotes to Sarah Palin.”  US Weekly editors stated, “Shortly after Thursday’s story was published, Us learned that the Palin-Hannity interview never took place, and that the quotes were the invention of a website. We sincerely regret and apologize for the error.”

After the publication, US Weekly reportedly spoke with Palin who stated:

“I had no interview with Sean [Hannity] and I have never bashed Christina.  In fact, I’ve defended her by telling folks to back off the criticism of her mistake.”

“Was Christina Aguilera’s Star-Spangled Banner slip-up enough to provoke war? Conan apparently thinks so. And you thought Sarah Palin went overboard by commenting that she wanted to deport the singer?”

iMediaEthics has written to TIME and US Weekly for comment and will update with any response.