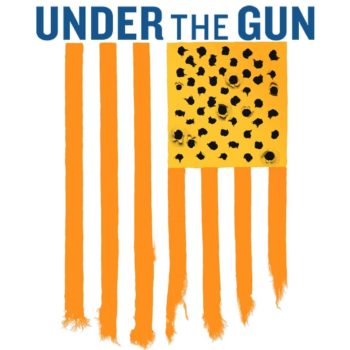 The Virginia Citizens Defense League is suing Katie Couric over her “Under the Gun” documentary, which included a misleading edit of her discussion with the gun rights group.

The VCDL told iMediaEthics today, “Katie Couric has publicly admitted that the film, which was presented to VCDL as a ‘documentary,’ was misleading and misrepresented VCDL. However, Couric and the other filmmakers have refused to fix the film or to even stop distributing it.  The only way to hold Couric accountable was to file a lawsuit.”

As iMediaEthics previously reported, the documentary added in nine seconds of footage showing the gun rights group’s members sitting in silence. That footage was inserted after Couric, the documentary’s executive producer and interviewer, asked the group a question about background checks. The edit makes it look like the members of the VCDL had no answer or were stumped by the question, when the VCDL’s recording of the interview shows they immediately answered.

The film’s director Stephanie Soechtig said she added the pause for dramatic effect. Couric apologized for the edit, but the VCDL’s president told iMediaEthics at the time that the group wasn’t ever contacted with that apology and the documentary wasn’t edited to correct the edit.

In an e-mail to its subscribers this week, VCDL confirmed that it filed a defamation suit against Katie Couric, director Soechtig, Atlas Films LLC and Studio 3 Partners (EPIX) in Virginia on Sept. 13. The VCDL included a few questions and answers about the lawsuit, including that filing the lawsuit is “the only way to hold Couric and her people accountable.”

“Couric has publicly admitted that the film was misleading and misrepresented the VCDL, but the filmmakers refuse to fix it or to stop promoting and distributing it,” the VCDL said.

The VCDL said it is paying for the lawsuit through “member contributions” and shared a link to the lawsuit complaint here.

EPIX told iMediaEthics, in a statement:

“The claims against EPIX in this lawsuit are completely without merit.  ‘Under the Gun’ premiered at the Sundance Film Festival where it received critical acclaim.  EPIX saw the Sundance screening and acquired the documentary at that time. The network had no role in its creation or production and should therefore not be a party to this lawsuit.”

iMediaEthics has reached out to representatives for Couric/Soechtig for comment.

The lawsuit claims the documentary shows “a work of fiction” because it suggested VCDL members didn’t have an answer to Couric’s question, when in fact the group did respond immediately with “nearly six minutes” of responses.

“After nearly nine seconds of silent footage—instead of the responses that the VCDL members had actually provided—the Defendants inserted footage of someone closing the cylinder of a fully-loaded revolver, driving home the point that the exchange was over,” the lawsuit states. “The manipulated footage falsely informed viewers that the VCDL members had been stumped and had no basis for their position on background checks.”

The lawsuit calls out the documentary makers for first editing the footage and then refusing to correct the misleading edit. “The fictional exchange is defamatory because it holds the Plaintiffs up as objects of ridicule by falsely representing that, as experts in their respective pro-Second Amendment trades, they had no basis for their opposition to universal background checks,” the lawsuit states.