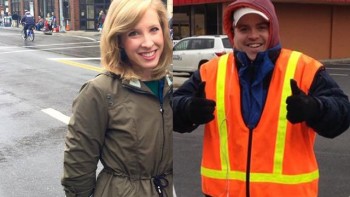 Two Missouri radio station staffers were suspended after they suggested on air the fatal shootings of two Virginia journalists last month were a hoax to boost gun laws.

Virginia WDBJ TV news anchor Alison Parker and cameraman Adam Ward were killed Aug. 26 during a live broadcast. Their former co-worker Vester Lee Flanagan, aka Bryce Williams, shot them, Parker’s interviewee Vicki Gardner, and later himself when the police tracked him down.

Radio host Joe Rios and his telephone screener Rick Masters were suspended over their Aug. 30 comments, according to the Springfield News-Leader. Their show Cracker Barrel airs on Sunday mornings on the three Scripps-owned stations KTTS FM, KSGF FM and KSGF AM.

The News-Leader said that Hansen characterized their comments as along the lines of “there might have been some thinking that it was intended to influence gun laws, so they fabricated the event.”

The apology, read on air by the stations’ manager Rex Hansen, said:

“Integrity. Respect. Compassion. Not just words, but three of the core values we live by here at KTTS. I’m general manager Rex Hansen. Last Sunday on Cracker Barrel two of our employees not only displayed poor judgment when talking about the recent murder of two of our colleagues from television station WDBJ in Virginia but went in a direction that was not factual, disrespectful and downright wrong. We apologize for their comments. They do not reflect the values we hold high here at the E.W. Scripps Company. Thank you.”

iMediaEthics has reached out to Rios via e-mail and Twitter. We haven’t found contact information for Masters.

iMediaEthics previously criticized the New York Daily News for its front page photo of Parker in her final moments with the gun pointed at her.