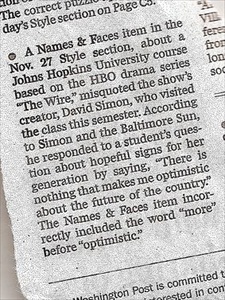 The Washington Post issued a correction for misquoting David Simon, the creator of HBO’s “The Wire,” Gawker reported.

Simon was quoted in the Nov 27 edition of the Washington Post as saying “There is nothing that makes me more optimistic about the future of the country.”

However, Simon actually said “There is nothing that makes me optimistic about the future of the country.”