Was Sopranos' Lillo Freed from Prison for 'Burglary' or 'Robbery?' NY Post 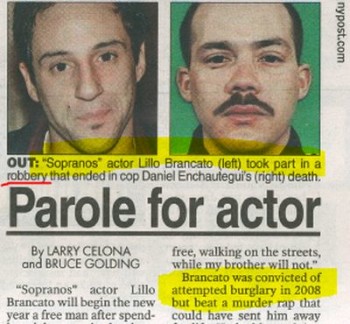 A New York Post caption yesterday stated "Sopranos" actor " Lillo Brancato "took part in a robbery" when, in fact, he was arrested and convicted for [attempted] "burglary" as the Post reported in the story.

A caption error about Sopranos‘ actor Lillo Brancato being released from prison created a factual contradiction in the print version of the New York Post‘s news story yesterday.

However, the Post caption said that Brancato, who portrayed Matthew Belivacqua on The Sopranos, “took part in a robbery,” a much more serious offense than burglary.

We called and emailed the NYPD, Office of the Deputy Commissioner, Public Information (DCPI) to fact check that Brancato was originally arrested for “burglary” (and murder of an off-duty cop), not robbery. We also asked to confirm that robbery is a more severe charge.

“Robbery is the use of force,” Mason explained. “Your house wasn’t robbed  You were burglarized,” she continued, “Removing property [alone] is not a robbery, even if you were there, and threatened.”

“You need to have been physically harmed [forced] for it to be a robbery,” she said.

We are writing to the New York Post to ask for a correction.