What's in A Name? : NPR Official Style Policy Now to Use Rahm Emanuel's First And Last Names in All References

What’s in A Name?: NPR Official Style Policy calls for Rahm Emanuel’s First And Last Names in All References 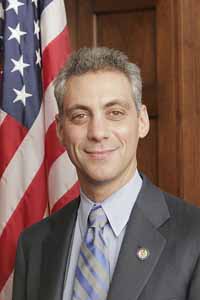 Rahm Emanuel, White House Chief of Staff to President Obama, is in possession of a name that gets special style treatment by media, including NPR. (Courtesy of the U.S. Federal Government)

Confused? So are we, after reading a November 18 article by NPR ombudsman Alicia Shepard about how NPR (and others) refer to White House Chief of Staff Rahm Emanuel.  It seems the chief has been getting various treatments in the press, many diverging from the traditional convention. Problematically to Shepard, and to StinkyJournalism, are reports that refer to Mr. Emanuel as “Rahm” (his first name). Most notably to Shepard’s post, is a November 12 All Things Considered, where Nina Totenberg referred to Emanuel three times by his first name only on-air.

According to Shepard, the general convention in journalism is to refer to a subject as “First Name Last Name” on first reference, and simply “Last Name” or “Mr. Last Name” or “Dr. Last Name” in subsequent mentions. There’s a good reason to follow this rule. First of all, it communicates respect for the person named. Secondly it ensures that you treat all of persons named in your story equally.

The second point seems to be the one most important to the issue with Mr. Emanuel’s name. As Shepard writes, a defense for using “Rahm” instead of “Emanuel” could be that the chief might prefer to be called by his first name, and that using “Rahm” is general practice. As Nina Totenberg says to Shepard “In Washington, and elsewhere, Rahm is known as Rahm.”

This defense works against the first principle, because if Mr. Emanuel doesn’t find the use of his first name disrespectful in life, it would be hard to argue its use is disrespectful in print. But the second principle–that of equality among sources–still holds. In an article discussing several different political actors, if all but Emanuel are referred to by their last names, the story may appear to be putting the staff chief in an inferior position and it could mislead readers.

Shepard reveals the trend on Mr. Emanuel’s name in other media sources:

Here’s the breakdown on how Emanuel is identified on other news outlets on the second reference:

The official NPR resolution to the issue over Totenberg’s usage is that “our style for him will have to be Rahm Emanuel, both names on first reference and second reference,” according to Ron Elving, NPR’s Washington editor, interviewed by Shepard. So it seems, Emanuel is the exception to the rule that “Standard news editorial practice across the board is to give a person’s full name on first reference and only the last name on second reference,” as Shepard writes.

But Shepard’s piece avoids another question at the heart of this issue: Why is Emanuel the exception to the rule?

Elving argues that the reason to use both names on second reference is that “no one, absolutely no one, refers to Rahm Emanuel as Emanuel, or Mr. Emanuel, or Chief of Staff Emanuel.” But that seems like a straw man defense, when the last-name convention is not necessarily changed for other people who may also be known by their first name in personal and professional circumstances.

Shepard goes as far as to say that “if it were up to me, NPR would not have a special rule for Emanuel (he’d just be Emanuel) — as it does for U.S. presidents.”

What’s in A Name?: NPR Official Style Policy calls for Rahm Emanuel’s First And Last Names in All References