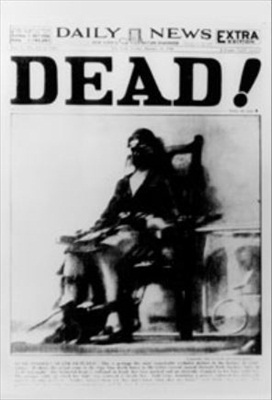 In 1927, the New York Daily News published the above photo of a woman's execution. (Credit: NYDaily News via Newseum, screenshot)

The decision by The New York Post to run, as a cover image, the photograph of a man about to be killed by a subway train in its Dec. 4, 2012 edition was nothing new under the “Sun.” Indeed, it was perfectly in keeping with a tabloid newspaper ethic that has been kept alive by the Post’s current owner, the ubiquitous Rupert Murdoch.

A New York Post freelance photographer was ready to shoot, rather than help, Ki-Suck Han, a Queens, N.Y. man who’d only moments earlier been shoved on the tracks by a demented stranger.

While the Post’s photograph, taken by Umar Abbasi, and its sensational headline (“DOOMED”), were jarring and repulsive for many, it’s instructive to step back and realize that this sort of gore was once, not that long ago, a regular feature of big city tabloid journalism in America.

Two examples, out of countless precedents, readily come to mind:

1. The Chicago Times, owned by Wilber R. Storey, set the stage on sensational tabloid-style “ethics.” During the Civil War, he instructed his war correspondents to “Telegraph fully all news and when there is no news send rumors.”

After the Civil War, Storey pushed the boundaries even farther, running the sorts of headlines found regularly in today’s New York Post. Storey, whose professed motto was “print the news and raise hell,” used the full front-page headline “JERKED TO JESUS” atop an 1872 story about the public hangings of four convicted murderers.

(He was once horsewhipped on a Chicago street by the subject of one of his paper’s sensational stories and, ultimately, faced twenty-four libel suits in a year. Perhaps needless to add, his newspaper was the widest-circulating daily in Chicago through the 1870s. Storey died from a combination of insanity and syphilis before he could become a national newspaper icon like William Randolph Hearst).

2. In 1927, New York was the battleground for a “war of the tabs” between the city’s three leading tabloid dailies–the Daily Mirror, owned by William Randolph Hearst; the Daily News, owned by Joseph Patterson; and the Daily Graphic, by Bernarr Macfadden. The story that unleashed the war involved a well-to-do Queens housewife and socialite named Ruth Snyder who murdered her husband while he slept on March 20, 1927. Her partner in crime was her lover, a corset and bra salesman named Judd Gray. The scandal of the murder, the ensuing arrests and trials were the talk of the city for weeks. The tabloids went into a feeding frenzy over the story. No aspect of the Snyder murder case was left unturned, or unexploited.

But then, the Daily News won the war by hiring freelance photographer Tom Howard (borrowed from the Chicago Tribune)—perhaps the forerunner of provoking public outcry recently created by Umar Abassi—to sneak a camera into Sing Sing Prison, where he surreptitiously snapped a photograph of Ruth Snyder at the moment 2,000 volts of electricity was sent through the helmet strapped to her head. The photograph ran on the front page of the Daily News the next day under the banner headline, “DEAD!” (which echoes the Post’s “DOOMED” on Dec. 4, 2012).

Largely because of photographs like the one of Snyder’s execution, cameras have been banned from death rows or even from courtrooms.

Indeed, it begs the question: if the American media freely publishes photographs of someone about to be killed by a subway train, shouldn’t it be allowed to film and broadcast executions?

Alan Bisbort is the author of Media Scandals (Greenwood Press, 2008) and a copy editor for iMediaEthics.org