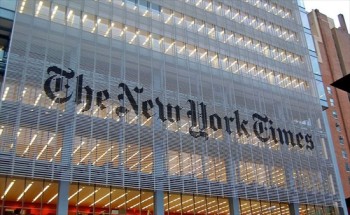 Why did the New York Times publish an Op-Ed by Marwan Barghouti about Israel and Palestine, but fail to disclose he was convicted of murder and of belonging to a terrorist group?

This was the fourth time in the past year that the Times has published a problematic Op-Ed.

Barghouti’s April 16 Op-Ed, “Why We are on Hunger Strike in Israel’s Prisons,” explained that he has been in an Israeli prison for 15 years and went on a hunger strike with 1,000 other Palestinian prisoners.

His Op-Ed’s dateline does note the article is from inside Israel’s Hadarim Prison.

Barghouti complains that Israeli prisons subject inmates to “torture, inhumane and degrading treatment, and medical negligence,” along with “a form of judicial apartheid.” The bio for Barghouti published by the Times at the bottom of the piece identifies him only as a “Palestinian leader and parliamentarian.”

Readers complained on social media and in e-mails, Times public editor Liz Spayd reported.  iMediaEthics has written to Spayd to ask how many complaints she received.

“This article explained the writer’s prison sentence but neglected to provide sufficient context by stating the offenses of which he was convicted. They were five counts of murder and membership in a terrorist organization. Mr. Barghouti declined to offer a defense at his trial and refused to recognize the Israeli court’s jurisdiction and legitimacy.”

The lack of disclosure in Barghouti’s Op-Ed is at least the fourth time in the past year that the Times‘ Op-Eds have attracted controversy for author issues, iMediaEthics has found.

iMediaEthics wrote to the Times’ Op-Ed editor James Dao to ask why Barghouti’s murder/terror convictions weren’t included in his bio or in the Op-Ed. We also asked him if the Times has taken any steps to proactively disclose more information about Op-Ed writers in the future to prevent questions and concerns like the three other Op-Eds cited below.

“The editor’s note was added to clarify information that was not in the original Op-ed but should have been. The New York Times newsroom and opinion pages have a policy of publishing corrections and editor’s notes as soon as we become aware of the issue as we did with the Op-eds you referenced.”

Three other OpEds gone wrong in past 12 months

1. June 2016: The New York Times‘ Op-Ed supposedly co-authored by South Sudan’s First Vice President Riek Machar called for a truth and reconciliation commission. But, after publication, Machar denied writing or being involved with the piece so the New York Times added an editor’s note.

3. November 2016: The Times published an Op-Ed by Jessica Lessin about Facebook and fake news but failed to disclose her full relationship to Facebook and Mark Zuckerberg. Lessin’s piece noted her husband briefly worked at Facebook, but public editor Spayd noted that Lessin’s husband was an old friend of Zuckerberg, introduced him to investors, sold a business to Zuckerberg, had Zuckerberg as a groomsman in their wedding, and was a vice president at Facebook. No editor’s note was appended but public editor Spayd discussed the issue on the Times‘ website.