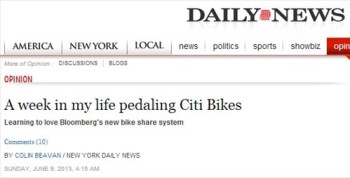 Colin Beavan praised the merits of Citi Bikes, New York City’s controversial new bicycle program, in a recent article for the New York Daily News. The program claims to have installed more than 6,000 bicycles and 300 stations in NYC, with the company planning to expand to a total of 10,000 bikes.

“It’s much easier to ride a bike in this city than it was five years ago,” Beavan wrote. “There’s the relative safety of bike lanes. Cars often wait to take a turn in order not to cut a biker off — a major change.”

But, the Daily News failed to mention that Beavan is not only a partisan biking advocate but a member of the Board of Directors for Transportation Alternatives, which “advocate[s] for bicycling, walking and public transit as the best transportation alternatives.”

While the Daily News did note that Beavan was the author of No Impact Man, a book about living by green principles, no other description was included about the biking enthusiast.  The newspaper simply wrote:

“Beavan is the author of ‘No Impact Man.'”

iMediaEthics asked Beavan why his advocacy role wasn’t disclosed by the Daily News and whether this had any effect on the objectivity of the piece.

Beavan defended his undisclosed conflict of interest in a June 13 email to iMediaEthics. He wrote, “My opinion piece on the opinion page of the Daily News is not about whether bike share is good for New York and the world, but whether it is good for me personally.”

While his piece only serves as a personal reflection, readers do need to know what his opinion is based on. In iMediaEthics’ view, the Daily News should inform readers of Beavan’s strong affiliation with bike advocacy when he’s writing about the virtues of his personal experience with Citi Bikes.

Beavan argued to iMediaEthics that he’s so famous in the media that there’s no need to include his affiliation to Transportation Alternatives under his name in the Daily News OpEd at question.

He wrote “[my] views are well documented in the public record and easily accessible through Google, my blog, my book, my movie, television appearances, newspaper articles, interviews during my congressional campaign and elsewhere.”

Sorry, even truly famous people must disclose their material connections when giving their personal opinions in the news. It’s a matter of fairness and trust.

In several recent OpEd articles by guest columnists, the Daily News has done a better job of displaying the credentials of its authors.

A June 14 New York Daily News OpEd written by Neil Kleiman and Jonathon Bowles proposed creating savings accounts for every child who goes to public school in New York City. The Daily News disclosed Kleiman as the director of the Wagner Innovation Labs at New York University and Bowles as executive director of the center for an Urban Future. It says:

“Kleiman is director of the Wagner Innovation Labs at New York University, and Bowles is executive director of the Center for an Urban Future. You can read their report at www.nycfuture.org.”

And, a June 17 New York Daily News OpEd written by Sol Stern criticized the state of education under Mayor Mike Bloomberg’s tenure and then suggested how it could be improved. Stern was identified as a senior fellow at the Manhattan Institute and the article noted that it was based on “After Bloomberg: An Agenda for the Next Mayor”.

Beavan has published two other articles with the Daily News in the past four years which have offered more extensive descriptions of who he is. A July 11, 2010 New York Daily News OpEd by Beavan highlighted the consequences of oil consumption and explained why there should more focus for energy alternatives. Beavan was unveiled as the author of No Impact Man and a director of NoImpactProject.org, which recommends pro-environment lifestyle choices:

“Beavan is author of No Impact Man and director of NoImpactProject.org, which helps people choose lifestyles that are better for them and better for the planet.”

His other OpEd, from February 13, 2011, covered why he wanted more bike lanes installed throughout New York City. Beavan was revealed as the author of No Impact Man and executive director of the No Impact Project:

“Beavan is the author of “No Impact Man” and the executive director of the No Impact Project.”

It is interesting to note how the descriptions of Beavan decrease with each article. Considering he’s only written three articles in a four-year span, does the Daily News expect their readers to remember who he is?

Neither the Daily News nor Transportation Alternatives responded to email inquiries from iMediaEthics about Beavan’s latest OpEd.