Why It's wrong to say Robin Williams had 'Demons,' CNN apologizes 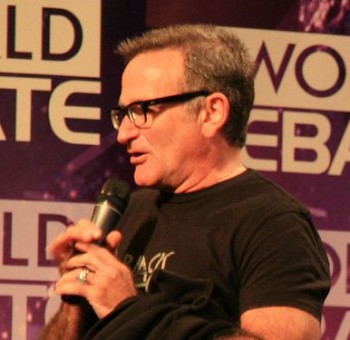 But why is it not OK to say demons? iMediaEthics asked the DART Center for Journalism & Trauma for guidance about why saying “demons” is problematic.

Executive director Bruce Shapiro told iMediaEthics by e-mail, “The problem with attributing Robin Williams’ death to ‘demons: ‘ from my point of view – it’s a reductionist cliche, stating the obvious while missing an opportunity to educate news consumers.”

CNN’s Turner acknowledged it was wrong to use the word “demons” in an August 11 segment on AC360. iMediaEthics asked CNN for comment about the apology and was provided the transcript of her comments. Turner’s rather disjointed comment is as follows:

“There is something I would like to say, earlier tonight when I was giving you a report, I did say that Robin Williams was battling his demons. I’ve been getting a lot of feedback from the mental health community in using that word.

“A lot of times when we’re doing live coverage we say things and we’re talking and we don’t realize what we’re saying. They’re absolutely correct. That it is a disease, and we’ve been hearing Dr. Drew talk about it, so I apologize for using the word demons, because Robin Williams by so many people’s account was a bright light, a bright light in Hollywood, a bright light in his life that was battling a disease.”

Turner also re-tweeted a post from a follower, @BrittanyLKaplan about her apology.

Props to @nischelleturner for apologizing and acknowledging that the word ‘demon’ should NOT be applied to mental health.

The Dart Center’s Shapiro added that “The Dart Center offers science-informed advice on covering suicide in several tipsheets and other resources on our website – among them this http://dartcenter.org/content/covering-suicide and others. Among other things we advise attention to suicide as an often-preventable public health issue rather than the inevitable outcome of an individual’s struggles.”

As iMediaEthics has written, there have been numerous ethical issues in reporting on Robin Williams. ABC News apologized for its aerial feed of Williams’ house after his death and admitted it had “no news value.” Fox News’ Shepard Smith apologized to Williams’ family after suggesting Williams was a “coward.” British radio station TalkSPORT apologized after a host saying he didn’t have “a lot of sympathy” for Williams. UK Channel 4 News apologized for including a clip from Good Morning Vietnam of Williams saying “Why don’t they get a rope and hang me.”

CBS and San Francisco-affiliate KPIX aired an interview with a KPIX employee who said he attended an Alcoholics Anonymous meeting with Williams. Fox News aired a clip of a random guy on YouTube dressed as Williams’ movie character Mrs. Doubtfire in its coverage of Williams’ death. And worst of all, Radar Online somehow got a photo of what it said was Williams at an Alcoholics Anonymous meeting and published it. At least it blurred out the faces of the other people in the photo.