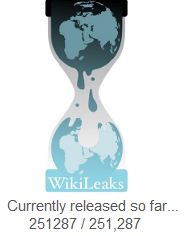 WikiLeaks published all of the 250,000+ leaked diplomatic cables almost a year after the site first started publsishing the cables. (Credit: WikiLeaks.ch, screenshot)

In light of the leak of a full unredacted copy of the diplomatic cables that make up what WIkiLeaks calls Cablegate, WikiLeaks has published all of the 250,000+ cables – also unredacted, Journalism.co.uk reported.

The move is reportedly in response to the file’s leak and, according to Journalism.co.uk, it was ” signalled by a tweet that read: “Shining a light on 45 years of US ‘diplomacy’, it is time to open the archives forever.”

(Read more about WikiLeaks’ accusations against the Guardian, the Guardian’s defense, and the leaked file here and here.)

Journalism.co.uk noted that WikiLeaks had only published about 20,000 of the cables until this past week when WikiLeaks suddenly published more than 130,000 cables.

The Guardian reported that it and four other news outlets once called “media partners” by WikiLeaks “strongly condemned” the publication of the unredacted documents.

The Guardian, the New York Times, El Pais and Der Spiegel issued a “joint statement” according to the Guardian stating:

“We deplore the decision of WikiLeaks to publish the unredacted state department cables, which may put sources at risk.

“Our previous dealings with WikiLeaks were on the clear basis that we would only publish cables which had been subjected to a thorough joint editing and clearance process. We will continue to defend our previous collaborative publishing endeavour. We cannot defend the needless publication of the complete data – indeed, we are united in condemning it.

“The decision to publish by Julian Assange was his, and his alone.”

The Guardian’s James Ball added in a tweet that Le Monde also “joins other original #WikiLeaks partners in condemning” the unredacted publication.

Gawker commented that besides the possibility of retaliation to those whose names are revealed in the unredacted cables, Julian Assange is “the biggest victim.”  Why? Gawker stated that because of this incident he “no longer has a reason to demand your attention.”

WikiLeaks provided the link to the “full, unencrypted, Cablegate 2 archive.”

The Guardian’s David Leigh, who was accused by WikiLeaks of providing the password to the cables, claimed that “No member of the public read the unredacted cables until #Assange deliberately surfaced them this week. Why has he done it? I despair.” As StinkyJournalism wrote earlier today, Leigh and the Guardian have stated that Assange said the password was temporary and would only work for a short period of time.

iMediaEthics wrote in December when the group offered to publish a mirror (or copy) of WikiLeaks’ site during cyber attacks on the site.

According to Journalism.co.uk, Reporters without Borders stopped hosting the site because it can’t “check each cable” which is unredacted, so the site didn’t want to put into danger any “informants.”

Assange to be Arrested?

The Guardian’s James Ball reported that Assange could be charged with “a criminal offence” in Australia.

The publication of unredacted cables this week led to the “identification of an intelligence officer” according to Australian attorney general Robert McClelland.