Writer complains after Mail lifts his work, weirdly lists him on byline - iMediaEthics

Writer complains after Mail lifts his work, weirdly lists him on byline 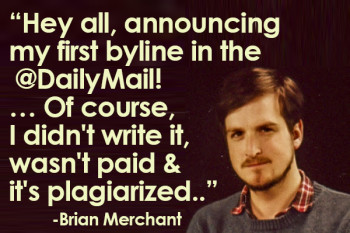 The Daily Mail lifted work from a writer for Vice’s Motherboard, but listed him in the byline for the article. In defense, the Mail‘s writer said the newspaper has an arangement with the writer’s publisher allowing it to use his work. But, the writer said he never heard of such an arrangement.

Brian Merchant, senior editor for Vice-owned site Motherboard complained on Twitter about the Mail lifting his recent article for Motherboard and oddly putting his name on the byline as co-writer with one of its staffers.

“Hey all, announcing my first byline in the @DailyMail,” Merchant wrote. “Of course, I didn’t write it, wasn’t paid & it’s plagiarized.” He added that it was “some bold stuff right there” to add his byline when the Mail used his work.

He tweeted a screenshot as evidence.

After he called the Mail out, the newspaper changed the byline to remove his name and add attribution to him. The byline now reads only “Anna Hodgekiss for Mail Online.”

Hey all, announcing my first byline in the @DailyMail! http://t.co/MgFKk92qTs Of course, I didn’t write it, wasn’t paid & it’s plagiarized..

@roseveleth @DailyMail I mean, I know they plagiarize relentlessly, but adding my byline too is just some bold stuff right there
— Brian Merchant (@bcmerchant) April 17, 2015

Merchant told Jim Romenesko that the Mail had contacted his outlet for permission in using a photo it published. The Mail “never contacted me or anyone else about any other matters,” he wrote to Romenesko.

He called the Mail‘s putting his name in the byline “very inappropriate,” noting that “it gave the impression that I had actually written those sentences, which I hadn’t, though they were based on ones I’d written previously, which makes the whole situation doubly bizarre. They gave me an authorship credit for a plagiarized version of my own story.”

The Mail writer, Anna Hodgekiss, claimed on Twitter however, that the Vice press office OKed the Mail‘s using the story.

She said the press office granted her permission and she had evidence.

Writer complains after Mail lifts his work, weirdly lists him on byline