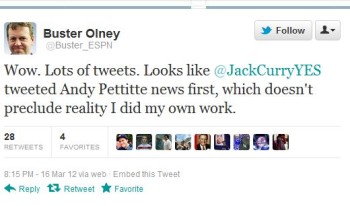 YES Network is a regional TV sports network covering the New York Yankees, the New Jersey Nets, and other teams.

Curry tweeted March 16 at 12:30 PM that “The Yankees have signed Andy Pettitte to a 1-year minor league deal worth $2.5 million. The team is thrilled to have 240-game winner back.”

Curry “went on a rampage” (apparently around 6:24 PM EST Curry started tweeting and re-tweeting about the credit issue) and sent “no less than 80” re-tweets critical of ESPN for not giving him credit, Awful Announcing reported.

Olney denied that he took or knew of Curry’s scoop, Awful Announcing wrote.

Olney noted about eight hours after the news broke that Curry did tweet the news first, that he “had no idea” Curry tweeted it first but that it “doesn’t preclude reality I did my own work.” Olney added that he is “looking forward to YES crediting ESPN” and noted that the “NYPost, NYTimes, Record, other stories don’t credit NYY network for Pettitte news.” (The New York Post’s March 16 story, the New York Times ‘March 16 story, and The Bergen (NY) Record’s March 16 story all reported on the news of Pettitte’s deal but didn’t say who broke the story.)

Olney added that he “constantly” re-tweets others’ work and links often. He responded to readers that “I don’t mean to be defensive; just answering all the tweets about” the issue, in which he indicated they separately got the scoop.

Olney also defended against claims that he said he “broke the story.”

Sports blog the Big Lead questioned if Curry gets “credit for breaking Yankees news” since he works for the Yankees network. The Big Lead defended Olney, noting that in this incident, “The more plausible explanation is Olney filed his report earnestly and independently, and Curry tweeted the information minutes before he could without his knowledge. This sounds reasonable especially since Olney goes out of his way to read, to credit and to provide exposure for every far flung beat writer in the country in his column on a daily basis. He is also required to file things with ESPN before tweeting.”

Ultimately, the Big Lead argued that this crediting incident is insignificant and noted that Olney also “credited Curry  for tweeting it first.”

History of Not Giving Credit?

Awful Announcing suggested that there is a “pattern” at ESPN where it will use “the details and framing of” a scoop from “another media organization” and add “mysterious wording like ‘sources’ or ‘ESPN has confirmed'” to avoid attribution and take the credit for breaking the news.

In terms of a pattern, the Big Lead did note that “ESPN has a history crediting (or “confirming”) stories that warrants the utmost skepticism.”

We asked ESPN if it had any further comment about the Pettitte story or Awful Announcing and the Big Lead’s suggestions about ESPN’s crediting for scoops.   ESPN PR/director of news content David Scott told iMediaEthics by e-mail that ESPN has no comment.

We have written to YES for comment and will update with any response.