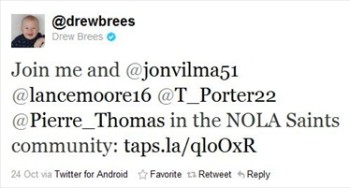 5 New Orleans Saints players tweeted links to the New Orleans Times-Picayune's website as part of a paid endorsement. Most tweets noted in shorthand that they were sponsored, but this one by Drew Brees didn't. (Credit: Twitter)

Under the arrangement, the athletes have “tweeted praise for the newly redesigned Saints community on NOLA.com this month and included a link to the site, urging their Twitter subscribers to check it out,” the Times-Picayune explained.

iMediaEthics searched the athletes’ Twitter pages and found these sample tweets include this Oct. 24 tweet by Drew Brees, which invites followers to “join” him and the other four Saints players “in the NOLA Saints community” with a link. While most of the other sponsored tweets iMediaEthics found (including this Oct. 18 tweet by Brees) included notes that they are “endorsers” or “spon” (short for sponsored), that tweet didn’t include any such disclosure.  Other tweets included Lance Moore’s Oct. 25 tweet and Pierre Thomas’s Oct. 19 tweet, Jonathan Vilma’s Oct. 19 tweet and Tracy Porter’s Oct. 25 tweet.

According to the Times-Picayune, Poynter‘s Al Tompkins called the arrangement “an obvious conflict of interest” because the media company made ” a dual relationship with the very people you’re covering.”

Advance Digital’s content vice president John Hassell defended the arrangement because the athletes’ tweets note that they are endorsed or sponsored.  “There’s full transparency. There’s no suggestion that the act of paid endorsement by a player reflects on the coverage of The Times-Picayune,” Hassell is quoted by the newspaper as saying.

Further, Hassell indicated Advance Digital’s marketing group worked independently of the news staff at the newspaper in making the deal.  “The intention here is to promote a new product, the Saints community on NOLA.com,” Hassell is quoted as saying.

The Times-Picayune noted that “The Twitter campaign called for the five Saints players to send out one or two tweets each, for a total of eight messages, over a ten-day period from Oct. 17 to Oct. 27. Each message encouraged the player’s Twitter followers to view Saints coverage on NOLA.com.”

The Associated Press reported that “The five players combined have close to 900,000 Twitter followers, with Brees having the most at nearly 700,000.”

According to Mondo Times, the Times-Picayune has a circulation of about 141,000 copies.