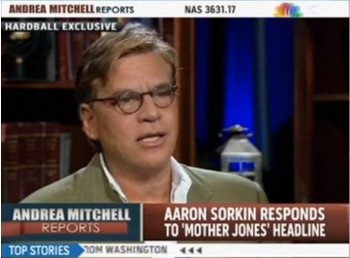 Director and screenwriter Aaron Sorkin criticized the Mother Jones website for having “lied” in a headline saying that he thinks the Huffington Post “sucks,” Politico reported.

The original headline read “Aaron Sorkin in Washington, DC: The Huffington Post Sucks” and accompanied an article about Sorkin’s comments at an Aug. 21 event that promoted Sorkin’s HBO show The Newsroom.

However, Sorkin said in an interview with MSNBC’s Chris Matthews he “did never and would never say that” the Huffington Post “sucks.” Politico noted that Sorkin “occasionally blogs for Huffington Post.”

Sorkin said of the “sucks” headline:

Asawin Suebsaeng, the writer of the Mother Jones article in question, pointed iMediaEthics to his statement to Politico about Sorkin’s criticism and referred us to Mother Jones’ editors for commnt on the headline change.  Suebsaeng had told Politico that he had written the headline. “Yes, as you can see from the quote in my piece (and I’m happy to send you the transcript), his critique was directed both at the Huffington Post and at a wider journalism phenomenon,” Suebsaeng is quoted as saying.

“We changed the headline because, as we noted in our editors’ note, we felt the new one more clearly characterized Sorkin’s comments. I don’t think it’s appropriate for me to comment on his comments, which speak for themselves quite eloquently, but I’m happy to send you the relevant portion of the transcript if that would be useful.”

“There’s just too much money to be made and too much fun to be had laughing at somebody else fail. And that’s become okay. It used to be the kind of thing that you didn’t do in public…And now it’s what covers…the homepage of the Huffington Post. “13 Epic #Fails.” There’s the need to put an exclamation point after everything, and there’s the need to…create fantastic stories instead of just reporting on things that we need. So the adjectives and adverbs that you’ll see in headlines are always about how somebody issued a blistering this against [someone or something]—just anything to get a clip.”

A note at the bottom of the Mother Jones article discloses the headline change, reading: “The headline on this story has been changed to more clearly reflect Sorkin’s comments about the press.”