Andrew Bowen, an Arab News columnist, wrote pro-Hillary Clinton and anti-Trump columns for the newspaper. Now, he wants a job under Pres. Donald Trump in the State Department, so he asked the Arab News to delete some of his columns, the newspaper has said.

Arab News, an English-language daily newspaper based in Saudi Arabia, refused to comply with Bowen’s request. They also outed him in a note to readers that explained how Bowen wanted to cover up his previous criticisms. Arab News said it wouldn’t delete the columns but it would end Bowen’s working relationship with the site.

Bowen is a visiting scholar with the American Enterprise Institute, a “neo-conservative think tank.” 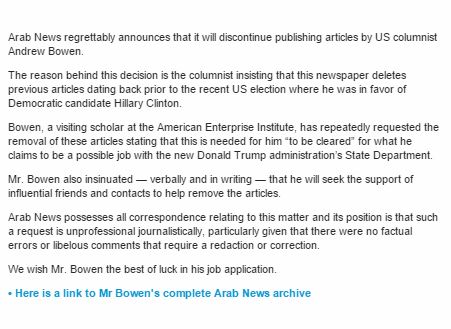 A screenshot of the now-unpublished Arab News note about Andrew Bowen.

The Arab News‘s note got a ton of attention on Twitter, but now has been deleted. Also missing? Some of those anti-Trump Bowen columns.

Talking Points Memo flagged one now-unpublished column from the day before the U.S. election that could prove particularly problematic in a job interview with the Trump administration.

In that column, Bowen wrote,

“Donald Trump has done more than any other presidential candidate in modern U.S. political history to whip up xenophobia and anti-Muslim sentiments in the US. His speeches and his image abroad have been used repeatedly in Daesh recruiting videos. He has become the poster child for some far-right nationalists movements. Trump has shown repeatedly a frank disregard for human decency and civility.”

Bowen further comments on Trump’s “questionable business practices and ethics” and “authoritarian tendencies and proclivity to speak more than listen,” which he said indicate he isn’t “suited to the responsibilities to the presidency.”‘

So what happened to change Bowen’s point of view?

Bowen told the Washington Post the Arab News‘ note about him “was not the most professional way to handle it” and that he was “deeply concerned and saddened.”

But Arab News hasn’t apparently made any statement about its original note, why it deleted that note, and why and how many of Bowen’s columns it deleted. iMediaEthics has asked Arab News about this.

Meanwhile, Foreign Policy reported that it saw one of Bowen’s e-mails to Arab News. In that e-mail, Bowen wrote that “The vetting team at the White House is incredibly more sensitive than I originally was told on any pieces ever written that in any way come across critical of the president.”

Foreign Policy also reported that an anonymous source told it Bowen had “Saudi government officials” try to get Arab News to take its statement down. iMediaEthics has written to Bowen and Arab News to ask for confirmation.

Bowen seemingly deleted some of his anti-Trump tweets and re-tweets, Foreign Policy added. iMediaEthics wrote to Bowen to ask about this and his attempts to get Arab News to unpublish his columns.

The Arab News‘ note about Bowen was published April 4, but was unpublished by April 6. An archive of it reads in full:

“Arab News regrettably announces that it will discontinue publishing articles by US columnist Andrew Bowen.

“The reason behind this decision is the columnist insisting that this newspaper deletes previous articles dating back prior to the recent US election where he was in favor of Democratic candidate Hillary Clinton.

“Bowen, a visiting scholar at the American Enterprise Institute, has repeatedly requested the removal of these articles stating that this is needed for him “to be cleared” for what he claims to be a possible job with the new Donald Trump administration’s State Department.

“Mr. Bowen also insinuated — verbally and in writing — that he will seek the support of influential friends and contacts to help remove the articles.

“Arab News possesses all correspondence relating to this matter and its position is that such a request is unprofessional journalistically, particularly given that there were no factual errors or libelous comments that require a redaction or correction.

“We wish Mr. Bowen the best of luck in his job application.