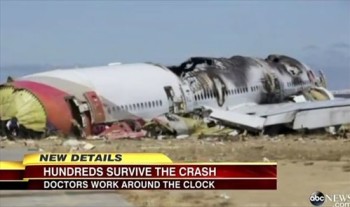 Asiana Airlines Flight 214 crashed on a San Francisco Airport runway earlier this month and at least three people have been confirmed dead.

A screenshot from the KTVU broadcast.

KTVU anchor Tori Campbell said, “We are working on determining exactly what roles each of them played during the landing on Saturday.”

KTVU quickly apologized for airing the made-up racist and offensive names, but oddly said that the National Transportation Safety Board had confirmed the names. The NTSB later admitted that a summer intern had “acted outside the scope of his authority” and confirmed the names.  The NTSB’s Kelly Nantel told iMediaEthics by email that the NTSB did not provide these names but only reviewed the names KTVU provided for fact checking. iMediaEthics has asked KTVU where it obtained the names and will update with any response.

“Regarding the KTVU-TV’s demeaning report of the pilots on July 12, ASIANA Airlines is reviewing possible legal action against KTVU-TV and the NTSB.

“The reputation of the four pilots and of the company had been seriously damaged by this report. The company is reviewing taking legal action against both KTVU-TV and the NTSB.”

iMediaEthics has reached out to KTVU seeking comment on the potential lawsuit and will update with any response.

The Asian American Journalists Association issued a statement on Friday criticizing KTVU’s error in broadcasting the four fake pilot names, NBC News reported. AAJA’s statement called the names “so grossly offensive” and added that it wouldn’t “repeat those names” in its comments about the “gaffe.”

AAJA called for KTVU to “conduct a thorough review to prevent similar lapses,” questioning how “those obviously phony names” made it to air.  Further, AAJA commented that even though the NTSB accepted some responsibility, “KTVU is hardly off the hook.”