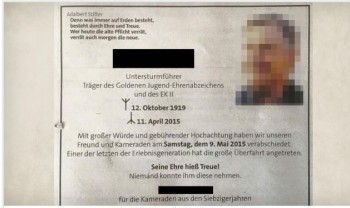 Austrian newspaper Kleine Zeitung made a “horrible mistake” by including Nazi references in a death notice, the Associated Press reported.

The newspaper’s May 30 notice reported that the deceased, Lois Plock, was a Nazi soldier.

Plock “was an ‘Untersturmfuehrer’ – a paramilitary rank of Hitler’s special SS forces,” the AP reported. “SS members served as Hitler’s bodyguard and formed elite police and military units that carried out many of the era’s Holocaust atrocities.”

The Kleine Zeitung report “also listed a Nazi-era decoration of the deceased and carried a verse associated with the oath of loyalty sworn by Nazi troops to the German dictator,” the AP reported. The verse stated: “Unsere Ehre heist Treue” — or “Our honor is loyalty.”

Kleine Zeitung apologized on Facebook, saying it was a “great regret” the death notice it published “glorified” Nazism. A Google translate of the apology statement says that it is reviewing “the firewall between advertisements and editorial.” In addition, the newspaper said it is going to “insert a second revision level.”

An apology from the newspaper’s editor Hubert Patterer was also printed on May 31, according to the apology on Facebook.

The full apology states, according to Google Translate:

“It was a terrible mistake to give the Parte with the aforementioned Nazi codes to set. It should not have appeared. We will clarify and draw the consequences for why the internal fuses failed. This also means to check the handling of the fire wall between ads and editorial. It implies that we do not see any ads, even the death of ads on our screens. Regarding the obituaries, we have this question and move a second revision level. We ask your pardon in consternation.”

“Austria’s Prohibiton Act makes any glorification of the Nazi regime a crime,” Austria’s the Local reported.

iMediaEthics has written to Kleine Zeitung‘s editor for more information.

Kleine Zeitung is a daily newspaper based in Graz, Austria, according to Mondo Times.  Its website says the newspaper has 787,000 readers with 277,990 copies sold.