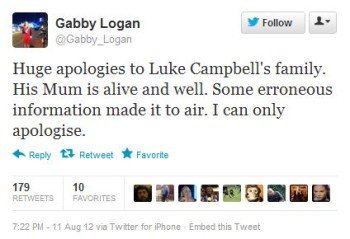 According to Yahoo Sports, the UK boxer Luke Campbell was “confused with that of fellow British fighter Freddie Evans,” whose mother Tracy and sister Scarlett passed away in 2006.”

“Huge apologies to Luke Campbell’s family. His Mum is alive and well. Some erroneous information made it to air. I can only apologise.”

We wrote to the BBC asking for more information about this error and how it happened.  We were sent the following statement from a BBC spokesperson:

“We are very sorry that incorrect information was given out about Luke Campbell’s family in our Olympics Tonight programme, and apologise for any concern or hurt caused to them. As soon as we realised the error, we made an on air correction.”

The UK Telegraph added that  “the error was compounded” because guest David Beckham then commented on Campbell’s dead family, saying:

“He has been through a really tough time in his life and boxing was obviously something that he wanted to go into and wanted to kind of prove to people how strong he is mentally and physically. He’s performed at the highest level and won us another gold and his mum and his sister will be smiling down and we are all so proud of what he has achieved.”

Check out all our stories on the Olympics.