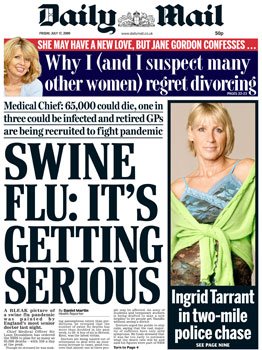 The spring and fall flu seasons this year have spurred a flood of sensationalist medical reporting focused on the H1N1 virus, or swine flu.  Some egregious examples from British tabloids like the Daily Express have been called out, as well as from Fox News, and ABC Australia News.

In a philosophical look at why we’ve seen such faulty journalism on the subject, Iain Brassington, a Lecturer in Bioethics, with a PhD from the University of Birmingham, argues a radical point on the BMJ Journal of Medical Ethics Blog October 13th:

Perhaps our expectation that medical journalism be ‘true’ is too high.  Maybe the most we can ask is that the press tell a story truthfully “that is, not disingenuously,” he says.

Though Brassington might be setting the bar a little too low here, his question about truth in medical reporting is a valid one.  Between an indisputable truth and a blatant lie there lies a vast gradient. “Clearly, one can be truthful while still diverging from a complete account of the matter in question – and this seems not only unproblematic, but inevitable and perhaps even desirable,” Brassington writes.

Brevity in journalism is often desirable. And, what Brassington calls a “complete account”–detailing every minutia–doesn’t have to be the best way to explain something. Journalists paraphrase, they pick and choose what to include and what to leave out. These are the tools of the trade, the things that distinguish journalism from stenography.

“Think of this analogy: we don’t say that a map is untruthful because it simplifies the landscape or because lines of longitude aren’t actually parallel,” Brassington says. “So a truthful account isn’t going to be complete, an incomplete account doesn’t necessarily lack truthfulness, and a complete account would be unmanageable.”

Clearly, some stories and some publications meet a threshold of scientific or medical truth that others don’t. In the case of H1N1, one need only look at the headlines of some of the examples above (“Killer Flu: It Is Here”) to see that they–often sensational and misleading–are not conforming to some of the basic rules of good journalism.

Brassington does draw this distinction between un-truthful reporting that is still acceptable, and un-truthful reporting that is blatantly wrong. “This isn’t about giving carte blanche to idiots and to the press to be deceitful,” he says. But at the same time, he seems to suggest that the very nature of all science reporting–that it can never present a full truth, only a “truthful account” is such that we shouldn’t trust it as a rule. “If we relinquish the expectation of reliability, it no longer matters that the stories are misleading. Maybe we just have to have lower expectations,” he writes.

Isn’t this throwing the baby out with the bathwater?

Brassington’s call to exempt all journalism from truthfulness would certainly put an end to the frustration of fighting bad journalism.  We’d have nothing to criticize in stories that miss the mark. But maybe that fight is important enough that we can’t, as Brassington suggests, “relinquish the expectation of reliability.”