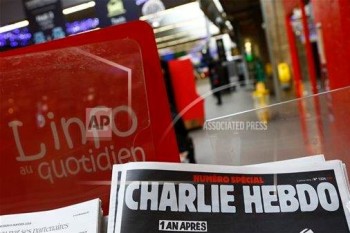 The Associated Press isn't using images of Charlie Hebdo's anniversary cover, instead just showing the top of the cover so the cartoon is hidden (Credit: AP, screenshot)

This week’s issue of the French satirical magazine marks the one-year anniversary since the attack in Paris.

The anniversary edition cover shows God depicted as a terrorist with blood stains on his clothing, a gun on his back, and the headline “1 an apres: L’assassin court toujours” (which translates to “One year later, the assassin still at large”).  Laurent Sourisseau, Charlie Hebdo‘s head of publication, told CNN that “It is a caricature representing the symbolic figure of God.” Sourisseau said it wasn’t Mohammad, but the “God of all those who have faith.”

“We made a determination that showing a caricature of God in this context was just as offensive as showing a caricature of a prophet and hence decided to not to use the cover image,” AP’s vice president and director of photography Santiago Lyon told the Washington Post‘s Erik Wemple yesterday. Mediaite noted that the Associated Press was selling images of the cartoon; the AP has since pulled the images.

iMediaEthics searched AP Images’ website for Charlie Hebdo images and the photos of the cover have been removed. There are two photos now that show just the top of the cover without showing the cartoon.

MSNBC also won’t show the cartoon on the air, Wemple noted in a separate blogpost. MSNBC showed the cover on the air earlier yesterday but told Wemple it stopped when it realized the image was of God.

Mediaite listed whether a handful of outlets, including CBS News and NYDaily News, published the new Charlie Hebdo cartoon on God (both did). The NY Daily News and CBS News photos both are credited to Reuters.

The Vatican’s newspaper Osservatore Romano criticized the cover, the Guardian reported. “This episode isn’t something new because, behind the deceitful flag of an uncompromising secularism, the French magazine once again forgets what religious leaders of different beliefs have been repeating for a long time to reject violence in the name of religion,” the paper said.

There were a host of media ethics issues and discussions surrouding reporting on Charlie Hebdo after last year’s attack. Some news outlets censored the magazine’s cartoons on Muhammad when reporting on the attack. These included the New York Times, where executive editor Dean Baquet decided “most” of the cartoons were “gratuitous insult” and didn’t match with the newspaper’s standards, even though the Times has published other offensive cartoons.

The New York Times also didn’t publish the cover image of Charlie Hebdo‘s first issue after the attack, which public editor Margaret Sullivan called the paper out on.

No UK national newspaper printed the Muhammad cartoons from Charlie Hebdo the day after the attack.

iMediaEthics has written to Charlie Hebdo to ask what it thinks of the use or avoidance of its latest cartoon.