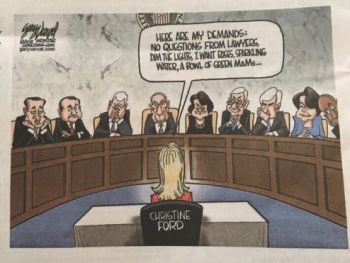 The Indianapolis Star “offended many readers” with a cartoon that made light of the forthcoming testimony by Dr. Christine Blasey Ford, the woman who accused Supreme Court nominee Brett Kavanaugh of sexual assault in high school, the Star‘s editor, Ronnie Ramos, admitted.

The cartoon showed a woman from behind, with the name Christine Ford on the back of her chair speaking to nine Senators. The cartoon has Ford saying, “Here are my demands: No questions from lawyers, dim the lights, I want roses, sparkling water, a bowl of green M & M’s…”

In a Sept. 24  statement, Ramos wrote that “our readers deserved better in this case” and “the cartoon did not meet our high standards.” The carton was by staff cartoonist Gary Varvel who wrote his cartoon “was focused only on Ford’s demands, not on whether she was telling the truth,” something he said he “should have made clearer.”

“Our editorial pages, which include columns and cartoons, strive to present diverse opinions across the political spectrum.  In Sunday’s paper, for example, Varvel’s work ran next to another syndicated cartoon that presented an opposing view,” Ramos wrote. “But the Indy Star also has a responsibility to promote a civil discourse and to present diverse viewpoints in a way that does not demean or appear to belittle anyone who says they are the victim of a sexual assault.”

The Washington Post wrote that Varvel’s “stringently conservative comics have turned heads for years.” iMediaEthics wrote about his Nov. 2014 cartoon, which showed a family climbing through another family’s window at Thanksgiving. As we wrote at the time:

“The cartoon, created by Gary Varvel, showed a family climbing through another family’s window to crash Thanksgiving. The caption read, “Thanks to the President’s immigration order, we’ll be having extra guests this Thanksgiving.”

“The family climbing into the window appeared to be Latino, the Huffington Post reported. Then after criticism, the Star changed the cartoon to remove a mustache from the man climbing in the window.”

iMediaEthics has written to Varvel to ask what he would have done differently and the Indy Star‘s editor for more information.