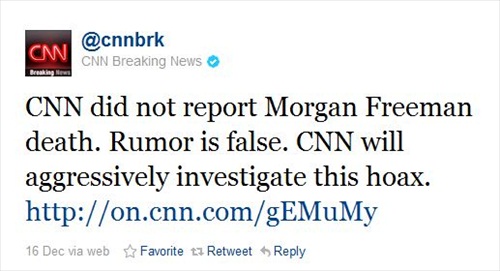 Morgan Freeman died? CNN and Morgan Freeman were both recently the victims of Twitter hoaxes. A fake message claiming that Morgan Freeman had died was spread on Twitter on Dec. 16.  Freeman is “very much alive,” Freeman’s representative Stan Rosenfield is quoted as telling CNN, CBS News reported.

The Morgan Freeman death hoax tweet was credited as a retweet of a CNN tweet.(Retweets are when one essentially “forwards” a Twitter message by another user.  When retweeting, the original message is preceded by the letters RT (for retweet) and the source’s Twitter user name.)

However, CNN denies having tweeted it.  In a statement on its Twitter, CNN claimed: “CNN did not report Morgan Freeman death. Rumor is false. CNN will aggressively investigate this hoax.”

According to E! online, the Twitter “originalcjizzle” is responsible for starting the hoax.  That user reportedly tweeted
“RT @CNN: Breaking News: actor Morgan Freeman has passed away in his Burbank home<< wow legendary actor #RIPmorganfreeman.”

C.J. Wiley, the user behind “originalcjizzle,” later apologized for the tweet:

“It was a joke that got too out of hand,” he tweeted. “It was an inside joke between friends. I had no intention of things turning out this way. I make cruel and vulgar jokes & I won’t apologize for my sense of humor, but I do apologize for crossing the line. I’m a huge fan of Morgan Freeman and I wish him the best in all future endeavors.”

Wiley explained in a Dec. 16 tweet: “Morgan Freeman is alive & well…I just issued a formal apology to a man who identified himself as an employee of the New York Post.”