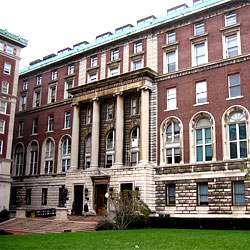 Columbia Journalism School seeks to update programs. The purpose is to prepare students with various integrated media skills that are now required of journalists.

InsideHigherEd.com reports that “The City University of New York’s Graduate School of Journalism, for example, recently announced that students will no longer have to pick a media concentration. This, its officials argue, will allow students to customize their own program for the ‘increasingly converged world of journalism.’ Also, two years ago, Northwestern University’s Medill School of Journalism introduced a new curriculum in which ‘multimedia storytelling is integrated through all reporting classes, and quantitative skills and ethics are woven throughout the curriculum.’ ”

As a recent graduate of the University of Maryland’s Philip Merrill College of Journalism, I think CUNY is on the right track by not forcing students to choose a concentration.

At UM, we had to choose between broadcast, print and online journalism in our first year. Broadcast students couldn’t enroll in print classes, and vice-versa. It was a rule I found incredibly frustrating. Just one year out of school, I am practicing journalism in all three areas, as are most professional journalists.

Columbia is on the right track by integrating more new media. It is where journalism is headed, and in order for these renowned graduate schools to prepare their sufficiently prepare their students, they will have to keep up.