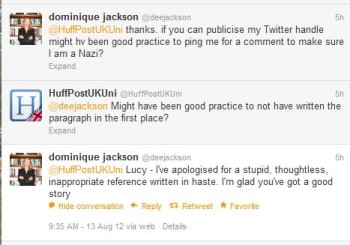 The Daily Mail unpublished without disclosure “an offensive paragraph” from a July 4 article on “youth unemployment,” the Guardian‘s Roy Greenslade reported.

The article carries an “updated” tag but no note of how it has been updated.  The article by Dominique Jackson called for “bright young graduates..to be more open-minded, less fussy, less precious and rather more energetic and ingenuous when it comes to applying for jobs.”

According to Greenslade, the section taken out of the article, shown in this screenshot, was

“The German slogan ‘Arbeit Macht Frei’ is somewhat tainted by its connection with Nazi concentration camps, but its essential message, ‘work sets you free’ still has something serious to commend it.  There is dignity to be gained from any job, no matter how menial, and for young people at the start of their careers, there are valuable lessons to be learned from any form of employment, whether that is on the factory floor, on a supermarket till or in the contemporary hard labour camp of a merchant bank or law office.”

The Huffington Post UK wrote about the “tasteless comment,” reporting that Jackson “informed the Huffington Post she had apologised and, following ‘extraordinary personal abuse’ had ‘personally asked ed at Mail to amend offending par’.”

“@HuffPostUKUni thanks. if you can publicise my Twitter handle might hv been good practice to ping me for a comment to make sure I am a Nazi?”

“@deejackson Might have been good practice to not have written the paragraph in the first place?”

We’ve written to Jackson and the Daily Mail for more information and will update with any response.