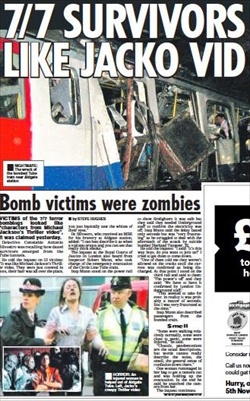 7/7 BOMBING VICTIMS LOOKED LIKE ZOMBIES? See above The Daily Star's report on a policeman's quote comparing the survivors of the 7/7/2005 London bombing to the zombies in Michael Jackson's "Thriller" video. (Credit: Daily Star, the Guardian)

Many news organizations reported the sensational quote from a police detective that compared the appearance of survivors of UK  bombings to the zombies in Michael Jackson’s “Thriller” video. However, the Daily Star’s reporting of the quote was criticized as an example of bad taste.

The Guardian’s Roy Greenslade cited the Daily Star for its “creepy lapse of taste” in its Oct. 28 reporting on the inquests into the 2005 London bombings.  The July 7, 2005 bombings, called 7/7, led to 52 deaths and almost 800 injured people.

The police officer’s quote, which was also reported by the Sky News,  The Telegraph the UK Press Association,  Greenslade’s Guardian and The Mirror, framed The Daily Star’s story.  It did not run the policeman’s words with quotation marks in its headline.

“It was like Michael Jackson’s Thriller video. They were just covered in soot, their hair was all over the place, you just basically saw the whites of their eyes.”

StinkyJournalism checked. Whereas the other news outlets did use the quote, they didn’t push the “Thriller” zombie comparison as the thrust of the story.

Meanwhile, The Star even went so far as to publish a screenshot from the “Thriller video” set inside of an image of “an injured woman” being helped by two police officers.  The headline on the Daily Star’s online story repeated the policeman’s quote without attributing it to him. Just as fact: “7/7 INQUEST: SURVIVORS WERE LIKE MICHAEL JACKSON THRILLER VID.”

“The really creepy thing is that the Star thought this an appropriate way to publish a story about an inquest into the deaths of 52 people,” Greenslade criticized.

iMediaEthics wrote to Steve Hughes, whose byline accompanied The Star’s article, asking why he chose to lead his story with the “Thriller reference,” why he included the quote, why the photo and headline were used, and if he had comment to Greenslade’s criticism.

Hughes defended his article, noting that the Star was not alone in publishing the policeman’s quote and blamed the headline chosen by his editors.  Hughes emailed StinkyJournalism:

“I think before you embark on whatever campaign you are running, you should realise that quote was the main quote (and indeed top line) on the Press Association copy on the 7/7 inquest that day. You should also see the Guardian’s report on the inquest, which also included the quote (as did every other newspaper in the land), before giving credence to Mr Greenslade’s ramblings. Just see many of the readers’ comments below his piece.

“I don’t intend to lampoon myself by answering your questions. However as any journalist knows, headlines and photos are not drawn up by reporters.”

StinkyJournalism replied to Hughes’ email cited above asking for specific examples of other newspapers and comments supporting his defense.

StinkyJournalism found that while other news organizations did use the same quote along with a considerable amount other information on the inquest, The Star‘s packaging of the quote, starting with the lede, was distinct. It was the only one we found to feature a headline, images with captions that emphasized the “Thriller” reference.

Regarding who wrote the headline and chose the photos and captions, StinkyJournalism asked Hughes to which editor we should direct our questions. We are waiting for his response.

iMediaEthics wrote about The Daily Star twice this summer for being tricked into publishing hoax stories–both stories, true or not  were in questionable taste and cost them in loss of reputation.

The first one we reported on was In July, after The Star apologized and paid undisclosed damages after publishing a hoax story that the manufacturers of the video game “Grand Theft Auto” would be creating a game “Grand Theft Auto Rothbury” inspired by a real-life shooting rampage.  The Star even interviewed a family member of one of the shooting rampage’s victims, but the video game story ended up being fake.

And earlier this month, iMediaEthics reported that The Star published a report that the mine where 33 Chilean miners were kept underground for more than two months would be turned into an amusement park.  However, that story was debunked by Tabloid Watch, which traced the story to a satire site.