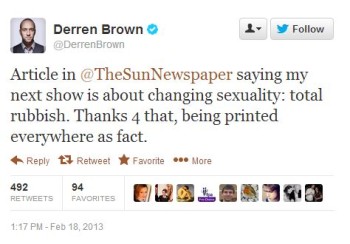 British television illusionist Derren Brown has denied a newspaper’s report that he will turn a straight man gay on live television.

How did the the newspaper get the story so wrong?  iMediaEthics learned that Brown’s “exclusive” interview with the the monthly magazine Gay Times was taken out of context, re-packaged, and then billed as an “exclusive” story for the UK Sun.

Brown has adamently rejected the Sun’s interpretation of his interview.

The 41-year-old took to his Twitter account just hours after the story appeared in the British tabloid The Sun to deny the claims, branding the report as “total rubbish.”

In what it called an ‘exclusive,’ The Sun ran the story on its website under the headline “Gays into my Eyes: Derren to turn straight man homosexual.”  The article began:

“He hopes his latest stunt will be as big a hit with viewers as last year’s Derren Brown: Apocalypse.

“Derren, 41, who came out as gay four years ago, said: ‘I was thinking about this the other day – it would be interesting wouldn’t it? To take a gay guy and make him straight and a straight guy and make him gay.'”

The story was later picked up by the Daily Telegraph with a Feb. 18 story, “Derren Brown: for my next trick I will make a straight man gay.”

“Article in @TheSunNewspaper saying my next show is about changing sexuality: total rubbish. Thanks 4 that, being printed everywhere as fact.”

He later wrote: “(This is why I rarely do press interviews. All so depressing  and silly).”

Check out some of Brown’s tweets below.

When contacted to explain the story, the Sun‘s TVbiz desk said: “The story’s from the Gay Times so take a look at that and then make your own mind up.”

The Sun’s story actually wasn’t an “exclusive” interview with Brown, as it was advertised. The paper re-packaged the Gay Times’ story and labeled it an exclusive since the Sun reported about the interview before other media outlets.

Gay Times editor Darren Scott told iMediaEthics: “It’s quite common for papers to lift stories directly from us. But here they lifted the quote, not the actual story, and so it wasn’t in context.”

Scott explained:  “Derren gave a direct response to a humorous hypothetical question. But at least on this occasion they mentioned it was from us.”

The story from UK gay magazine the Gay Times’ forthcoming April edition carries an exclusive interview with Brown.  The article hasn’t been released yet, but a Gay Times receptionist read the full quote to iMediaEthics to show how the Sun misinterpreted Brown’s comments.

“‘I was thinking about this the other day – it would be interesting wouldn’t it?

“I think you’d only get that kind of affect for a short period of time.

“But it would probably be more of a role-playing thing.

“But I’m not sure it would last long.

“I was thinking would there ever be a plot in here for a show.

When asked by iMediaEthics to make a statement, Mr Brown’s agent Greg Day said: “Derren has said what he wants to say via twitter.”