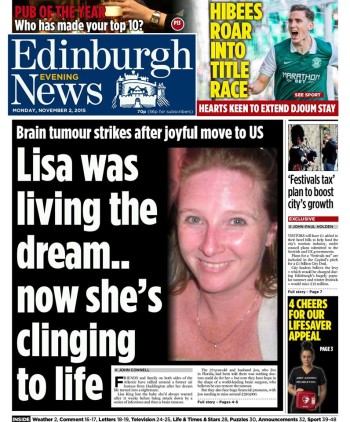 The Edinburgh Evening News wrongly reported a former soldier died from an apparent suicide the week he was facing assault charges from his ex-girlfriend, according to the UK Independent Press Standards Organisation.

The ex-girlfriend, the mother of the soldier’s child, objected to the May 28 article, which has now been unpublished because of her complaints.

Setting the record straight, the woman said that ex-boyfriend “had not been due to appear in court charged with her assault the week he died, as reported in the article and its headline.” Instead, he was facing “charges of supplying cocaine and possession of cannabis, which he denied.” The assault charges from 2011 had been resolved already.

iMediaEthics is not naming the complainant because she indicated to IPSO she didn’t want the matter and story re-circulating.

He “had been charged with assault in 2011, and the matter had been dealt with then; his apparent suicide was unrelated to those charges. At the time of his death, Mr Glover had access to their son and the complainant’s relationship with him was civilised.”

The woman was especially upset because “her son was dealing with the tragic news of his father’s death,” IPSO reported.

IPSO ruled that the newspaper’s offer to publish a correction and response to the errors was a good move, but noted the woman didn’t want more information about the matter published. Since the Evening News “reacted appropriately to the complaint,” IPSO ruled the newspaper didn’t have to publish the ruling. The Evening News “recognised the inaccuracy, accepted responsibility for it, removed the online article, and offered to publish a correction that clearly addressed the inaccuracy, and included an unreserved apology,” IPSO concluded.

Despite the woman’s concerns about bringing the story up again, IPSO ruled the newspaper needed to publish the correction online and in print because “other individuals might have a legitimate interest in the correction of this significant inaccuracy, such as family members and friends of the deceased.” Both the correction and the IPSO ruling named the man. The IPSO complaint named the woman as well.

IPSO didn’t find that the article was an “intrusion into the complainant’s grief.”

Euan McGrory, the deputy editor for the Evening News, told iMediaEthics by e-mail:

“The report was written by a freelance reporter who regularly contributes to our title and was accepted in good faith. The freelance accepts that they made an error and we removed the story from our website immediately we learned of the mistake and offered to print a correction and apology. The quality and accuracy of everything we publish is fundamental to what we do at the Evening News and so naturally we take an incident like this extremely seriously.”