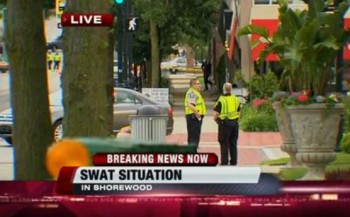 A screenshot from the real WTMJ broadcast. (Credit: WTMJ, via Journal Sentinel, screenshot)

A fake photo was circulating that purported to show a Milwaukee TV news error.

The image grabbed lots of attention, but WTMJ denied that the image was real, the Journal Sentinel reported.  Vice president of radio and TV for WTMJ’s parent company Steve Wexler said the photo was “a hoax” because an examination of the video “frame by frame” didn’t show that image.

“It appears that someone with too much time on their hands and a sophomoric sense of humor used software to alter the pictures and distribute them,” Wexler said.

The station’s Bill Berra gave the Journal Sentinel a copy of the video of the segment, which proves the “Twat Situation” wasn’t aired.

According to another report by the Journal Sentinel, WOKY-AM’s Gregory Jon posted the photo (below):

iMediaEthics has written to Berra for comment and will update with any response.