Fauxlympics: Fakery at Olympics in Beijing

Fauxlympics: Fakery at the Olympics in Beijing 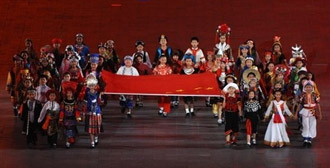 FAKE DIVERSITY... It's not a small world after all? It's alleged that all "the 56 children who carried out the Chinese flag in a moment meant to showcase national harmony were all from the Han majority" ? » more

Quoting Yahoo News: he writes, “As if that weren’t enough, there’s [the third fakery]… ‘Just nine months before the Beijing Olympics, the Chinese government’s news agency, Xinhua, reported that gymnast He Kexin was 13, which would have made her ineligible to be on the team that won a gold medal this week.’

“Oops…And now, [fourth fakery] we’ve got the ‘Ethnic Minority’ children, who were all of the Han majority (90 per cent of Chinese are Han.) This, despite the claim that the 56 children represented each of the ethnic identities.”

Fauxlympics: Fakery at the Olympics in Beijing