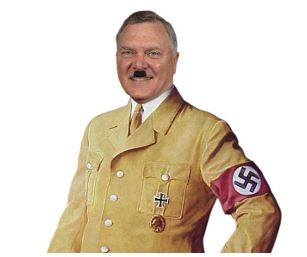 The  Jan. 6 photo illustration portrayed the new governor, Nathan Deal as Nazi, “wearing a Nazi uniform, a swastika armband and a Hitler-like mustache.” The photo was not captioned to disclose that it was doctored on its website, but it was in the print edition.  El Nuevo Georgia‘s editor, Rafael Navarro, explained in an e-mail to iMediaEthics that in the print edition, the photo carried the disclosure that the image is a “Cartoon of Deal elaborated by El Nuevo Georgia,” or “Caricatura de Deal elaborada por El Nuevo Georgia.”

It went with a story called “Repression in the Age of Deal.”  According to CNN, the newspaper’s editor, Rafael Navarro, explained the photo was published to “call attention to Hispanic issues.” Navarro is quoted as saying:

“Americans don’t read our paper because they can’t read Spanish. They don’t read our news, our editorials and the opinion of the community. But if they see a picture, they’ll get it.”

iMediaEthics asked Navarro why El Nuevo Georgia chose to use Nazi imagery as opposed to any other imagery in its illustration. He wrote :

“We used that image just like we can use any other. The reason is to call out attention about a debate in which an official like Deal, hadnt received the importance that he has. Instead of  looking for solutions to the problem, he has been aggravating with slander towards the immigrant community in general.”

Deal said in April 2010 that he agreed with the Arizona legislation toward immigration, the Atlanta Journal Constitution reported. “As governor, I’d work to pass and sign similar legislation,” Deal said during his campaign.

When asked for comment about the criticism the newspaper has received over the cartoon, Navarro wrote to StinkyJournalism: “All critics and comments are valued. We are not looking to differentiate between positive or negative. All, including insulting comments, have there value to us and are well received. ”

According to CNN, one of the politicians quoted in the story, representative Pedro Marin, claimed that he didn’t know the photo would be published when he was interviewed.

“It is disrespectful,” Marin is quoted as saying. “I might disagree with the policies of Governor Deal, but I respect him and the office he represents.”  Marin went on to say that “it is a shame that he decided to print the photo to sell more papers.”

“Those who can’t formulate a coherent argument in our society’s marketplace of ideas often resort to childish, even offensive tactics. This is pathetic.”

Navarro reportedly said that “traffic at the paper’s website spiked after the picture went up.”

iMediaEthics has written to Deal and will update with any response.