God and The Internet: The Dalai Lama Did Not Twitter While The Pope Promises To Use Google 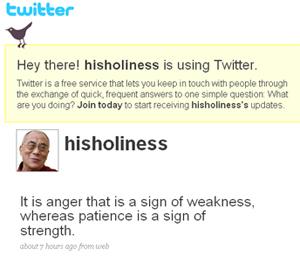 The Dalia Lama may not Twitter but The Pope promises he will use Google searches in the future after making an error. The image above is not the Dalia Lama's actual Twitter account.

A peculiar question arose after a fake Twitter account for the Dalai Lama was exposed: Can the Dalai Lama Twitter and still be a good monk? Apparently not according to the LA Buddhism Examiner.

The LA Buddhism Examiner explained: “A fake Dalai Lama account on Twitter attracted 20,000 followers in the two days that it took to be launched, reported as a fake by the office of the exiled Tibetan Buddhist monk, and taken off air. Before the account was exposed as a fake, the story was picked up by Agence France-Presse, PC Magazine, Tech Digest, and other notable news feeds and blogs. Twitter suspended the account when they discovered that it was not created by the Office of His Holiness the Dalai Lama.”

His Holiness has no time for Internet social networks, the follower said. “It isn’t too likely that he’d (The Dalai Lama) ever Twitter, Facebook, or LinkIn. These social networking platforms are outside of the Dalai Lama’s ‘job.’ If you ever got a chance to see his daily schedule, it would be obvious: the Dalai Lama works 24/7.”

Somehow this comment seems to miss the point. These social networks are a new way to do his job. The stated goals of “public lectures and teaching” and “serving the community” offer ripe content for social network systems.

Another spiritual leader, Pope Benedict XVI, has recently identified the importance of Google searches for church operations. The Holy See wrote to church leaders that he regretted not using Google before reinstating an ex-communicated priest. The Pope admitted: “I have learned the lesson that in the future the Holy See will have to pay greater attention to that source of news.”