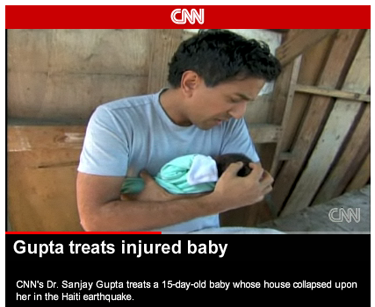 Though CNN has been otherwise praised for its coverage of last week’s earthquake in Haiti, some coverage of the disaster, especially by Dr. Sanjay Gupta, has highlighted the danger of self-promotion and sensationalism in reporting this tragedy.

In an article that otherwise praises CNN for sticking to the news on the ground while other networks like Fox News used the disaster to field political commentary, James Rainey writes,

No matter how much CNN succeeded in delivering the story, it will never make me stomach the self-promotion that it and other outlets insist on weaving throughout their coverage. Can we please get through an hour without heaping praise on our correspondents’ valor (however real it may be)?

On point of criticism is the way CNN has highlighted footage of correspondent Dr. Sanjay Gupta bandaging the head of an infant girl injured in the quake.

Gupta has been criticized before for blurring his reportage by becoming a player in the medical stories he covers. A practicing neurosurgeon, Gupta maintains that his role as a physician comes before his role as a journalist. “Yes, I am a reporter, but a doctor first,” he wrote on Twitter. And clearly, where medical care is necessary, it would be unethical for him to refuse to provide it.

But the question is more complicated than Gupta’s Hippocratic oath trumping his journalistic one. It extends to how CNN chooses to negotiate these separate loyalties Gupta holds, and how it chooses to feature him as a reporter and as a caregiver.

Matea Gold, writing at the Los Angeles Times blog Show Tracker, quotes ethics expert Bob Steele, who has written about Gupta’s Hippocratic conflict before. She writes, Gupta’s work on the baby girl, though ethically necessary, may have been given too much prominence by the network. Steele tells her, “Frankly, it isn’t much of a story… You can’t help but look at this and worry there is a marketing element in it.”

Rainey writes, “Maybe Gupta can’t be stopped from playing both reporter and doctor (he is a neurosurgeon, after all), but how many times are we going to have to watch that video of the good doctor bandaging the head of a 15-day-old girl?”

Steele says to Gold, the simple act of helping an injured person is not the issue. Any reporter could be caught in a situation where their skills compel them ethically to help a sick, injured, or trapped person, especially in a disaster situation. Unplanned, this doesn’t compromise ethical news production. However, he tells Gold, CNN should know that this is likely to continue to happen with Gupta and consider assigning him stories where he is not likely to have to blur his role as a journalist:

The problem in Dr. Gupta’s case is that he has done this on a number of occasions in Iraq and now in Haiti. If it’s imperative that he intervene and help medically, then take him out of his journalistic role and do that. But don’t have him covering the same stories in which he’s a participant. It muddles the journalistic reporting. It clouds the lens in terms of the independent observation and reporting.

As Rainey and Steele point out, giving Gupta’s medical feats a prime place in coverage can also be viewed as a form of self-promotion for CNN.  At the same time, issues over Gupta’s dual role continue to crop up.

Giving more and better attention to mitigating any issues with Gupta’s competing interests, and to avoiding overt self-promotion, would allow viewers to simply experience the (otherwise exemplary) CNN coverage in Haiti for which Rainey commends the network.