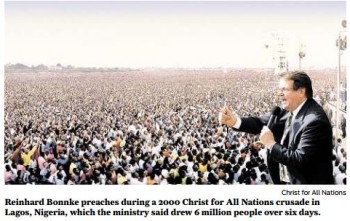 The image was a photo composite of a picture of Christ for All Nations evangelist Reinhard Bonnke with another photo of an audience in Nigeria in 2000. It was supplied by Bonnke’s ministry.  Chronicle editors said they didn’t know the photo was doctored until after its publication.

Nancy Barnes, the Chronicle‘s editor, told iMediaEthics by email she learned the photo was doctored after being asked about social media comments on the photo.

“There was some buzz about the photo on social media, and the question was brought to my attention Monday morning,” she told iMediaEthics by email.  “It’s not obvious if you are just looking at a small version of the photo, but when you examine it in detail, it’s more clear that there is a problem.”

The newspaper unpublished the photo from its web edition and ran a correction in print, she added.

“The group that distributed the photo also apologized to us for sending an altered photo,” Barnes told iMediaEthics, noting that “Our photo policy is that we will only run hand-out photos when nothing else is available, and we can verify the accuracy of those photos. We reinforced that with our staff on Monday. We regret any confusion this caused our readers.”

“A photograph appearing with a story on page A1 about Reinhard Bonnke on Monday was digitally manipulated by the evangelist’s organization to superimpose the preacher’s image on a crowd of about 1.6 million gathered for a 2000 crusade in Lagos, Nigeria. Mary-Kathryn Manuel, U.S. director for Bonnke’s Christ for All Nations, said the photo was a combined shot of the crowd during daylight hours and Bonnke preaching after nightfall. The photo, provided to the newspaper by Bonnke’s crusade, was not represented to the newspaper as a digitally altered image. The Houston Chronicle apologizes for this error.”

The photo credit in the print edition listed Christ for All Nations, which is Bonnke’s ministry.  The faked photo accompanied an article about Bonnke’s upcoming visit to Houston.

iMediaEthics has written to Christ for All Nations for comment.