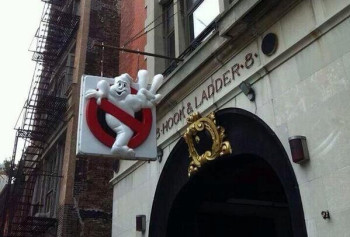 The above image circulated this week after Harold Ramis's death(Credit: Orphaned work via Twitter)

Who ya gonna call?  It’s the New York City Fire Department, in the case of an old photo of the Ghostbusters sign outside of FDNY Ladder Company 8 that circulated this week after the Feb. 24 death of Ghostbusters‘ writer and actor Harold Ramis.

The Huffington Post UK, Digital Spy and Globe and Mail are among the outlets duped.

Dwyer told iMediaEthics, “I do not know when the photo was taken or the original source.”

“It appears to be a photo from years ago, possibly when the movie was filmed,” he wrote by e-mail.

We asked Dwyer if any news outlets contacted the FDNY to verify the image.  According to Dwyer, only four news outlets besides iMediaEthics reached out for confirmation. “We had inquiries from WCBS, USA Today, Huffington Post and Gothamist.com,” he wrote.

He also pointed iMediaEthics to FDNY’s tweet about the photo

For all who saw/shared the photo of the #Ghostbusters sign outside #FDNY Ladder 8, please know it is *not* a current photo. #RIPHaroldRamis

Many news outlets, including the Globe and Mail, credited the photo to Irish Multiplex Cinemas’ Twitter page.

FDNY Hook & Ladder 8 “The Ghostbusters House” put this up in memory of Harold Ramis today – love it! pic.twitter.com/jgCfLABLHx

Huffington Post UK has posted an update to its story admitting the photo was inaccurate. The update says:

“UPDATE: It turns out this picture of the Ghostbusters sign outside FDNY Hook & Ladder 8 is an old image (likely from the filming of Ghostbusters 2) and it wasn’t put up in memory of Harold Ramis. The image went viral on Twitter but a spokesman for FDNY tells HuffPost UK the sign is not currently on display. He added the service traditionally pays tribute to fallen crew with bunting. However, proving the star is very much on the minds of loyal fans, Twinkies, flowers and photo tributes are mounting outside the building.”

The Globe and Mail also reported on the image as if it were current, embedding IMC Cinema’s tweet. The Globe and Mail wrote: “Outside the fire hall featured in Ghostbusters, this sign was erected in honour of the star who played the famous Dr. Egon Spengler.”

Digital Spy headlined its report: “FDNY mourns Harold Ramis with Ghostbusters logo – picture.” As of this morning, the story doesn’t carry a correction.

The website Guyism also was duped. Its story reads in part:

“FDNY Hook & Ladder 8, the firehouse that was the headquarters for the Ghostbusters in all three movies, hung a Ghostbusters sign outside of the building in memory of Ramis. A fan passing by the firehouse noticed the sign, snapped a pic, and posted it to Twitter.”

Perez Hilton also fell for the photo. His story was titled:  “The FDNY Pays Tribute To Harold Ramis In The Best Way Possible.”

USA Today previously debunked the photo as not current.