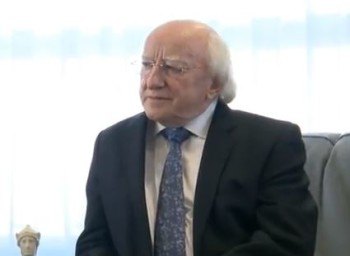 Michael Higgins, the president of Ireland, pictured above, is married with four children. Forbes wrongly said he is an "acknowledged homosexual." (Credit: YouTube, "UNESCO," screenshot)

Forbes wrongly reported that Ireland’s president Michael D. Higgins is gay, the Associated Press reported. The July 23 article described Higgins, who is married with four children, as an “acknowledged homosexual.”

An “Editor’s Note and Correction” replaces the article in question on Forbes‘ website. It reads:

“On July 23, an article appeared on Forbes.com about American UN Ambassador nominee Samantha Power that contained a serious error concerning the President of Ireland, Mr. Michael D. Higgins. Both Forbes and the author of the post David Monagan sincerely regret the error. Forbes will be issuing an apology to President Higgins in a separate correspondence.”

iMediaEthics wrote to Forbes asking how long the article was online, how Forbes learned of the error, and how Forbes will be apologizing separately to Higgins.

Mia Carbonell, senior vice president for corporate communications at Forbes, responded to iMediaEthics with a statement very similar to the one published on Forbes‘ website (and above in this article). The only differences are that the statement Carbonell sent says the article was by “a contributor to Forbes.com,” that a “private apology” has already been made to Higgins and that the article wasn’t published in the print version of Forbes.

The author of the Forbes article, David Monagan, an American who lives in Cork, Ireland, according to the Irish Independent, and called the error “the worst mistake I have ever made” and “inexcusable.”

“I have been reporting on the most complex, difficult things, including cardiovascular medicine for 35 years and I have never had a mistake like this,” he went on.

I made the worst error in my life as a journalist, am so regretful. Love Ireland, messed up in a hurry not to be excused.

One of Higgins’ former opponents in the 2011 presidential race, Sen. David Norris, is “famously open about his homosexuality,” the AP added. iMediaEthics has reached out to Monagan asking if he confused Norris with Higgins and for more information about this error. We’ll update with any response.