Is Nine Times The Same Cover Enough? Cosmo Plagiarizes Itself with Jolie Pic 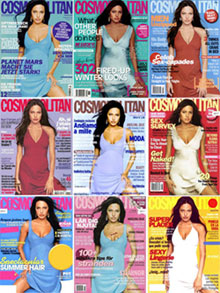 A recent article by “Richard” at Gawker brought solid evidence to the table regarding Cosmopolitan Magazine’s relentless recycling of its own content. A reader submitted nine covers of international editions with nearly the same picture of Angelina Jolie, digitally manipulated slightly, he claimed, to change the color of her dress as well as the position of her arm.

Although it is rarely recognized as such, self-plagiarism is as significant a breach of ethics as the outright lifting of content from other sources. While there are instances where it is perfectly reasonable to refer to prior content, it must be properly sourced.

While attention to self-plagiarism is rare in the journalism world, it is taken seriously in academia. The University of Arizona at Tuscon, which created a tool to combat such instances, aptly explains the problems inherent to self-plagiarism:

“It is our belief that self-plagiarism is detrimental to scientific progress and bad for our academic community. Flooding conferences and journals with near-identical papers makes searching for information relevant to a particular topic harder than it has to be. It also rewards those authors who are able to break down their results into overlapping least-publishable-units over those who publish each result only once. Finally, whenever a self-plagiarized paper is allowed to be published, another, more deserving paper, is not.”

Incidents of self-plagiarism are not relegated to women’s magazines nor are they limited to recycling content from within a single publication.  According to Regret The Error, in August 2007, a reporter for the Explorer, a weekly paper in Arizona, was fired for using a lightly updated article written for a journalism class for the paper.

While this may seem odd at first glance, self-plagiarism jeopardizes a publication’s credibility. In the instance of the Explorer reporter, the reused article contained outdated information.  Additionally, self-plagiarism renders the date of an article’s publication unreliable so the correct citation of articles using previously run material is a problem. Trying to pass of old content as new is also dishonest and a breach of reader trust.

In the case of Cosmopolitan, the reader wonders if the nine covers featuring Angelina Jolie translate to nine fresh interviews with her as the covers would imply… or are the interviews recycled too?