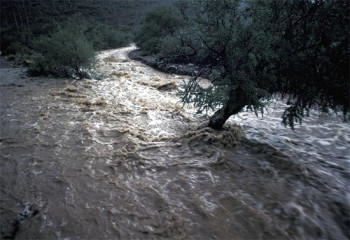 Several news outlets claimed Israel intentionally flooded the Gaza Strip. The AFP, Al Jazeera and the Daily Mail were among those reporting claims by Gaza’s civil defense agency, according to conservative news site the Blaze.  Those three news outlets have now unpublished or changed their reports.

Agence France Presse unpublished a video report on the claims, according to Honest Reporting and the Blaze, after the Committee for Accuracy in Middle East Reporting in America (CAMERA) complained.

“We withdrew a video report filed from the Gaza Strip in which local residents accused Israel of causing the flooding,” the AFP’s Global Editor-in-Chief Phil Chetwynd told iMediaEthics by e-mail. “We withdrew the images because they were filed in error and did not comply with AFP editorial standards by getting balancing comment from the Israeli side.”

Calling it an “editing error,” Chetwynd pointed iMediaEthics to the AFP’s Feb. 25 tweet stating it “withdrew a video showing flooding in Gaza which was filed in error without balancing Israeli comment.”

Chetwynd said that the AFP has “sent a reporting team to the scene to look at both sides of the story (from both the Gaza and Israeli side) and ascertain the full facts. We will publish the report on Friday.”

Here is that story, “Gaza Floods: Dispelling the Myth about Israeli ‘Dams.‘”

The AFP was contacted by “groups in Israel” about it being incorrect to say Israel was responsibile for the flooding, he addded. “The flooding story itself was covered by several media in Gaza, the flooding exists,” Chetwynd wrote. “The issue is the allegation from Palestinian residents and officials that Israel is to blame.”

In a Feb. 25 editor’s note replacing the story, Al Jazeera said the premise of the article— that Israel could open dams to flood part of Gaza — was baseless because those dams don’t exist. As such, Al Jazeera apologized,”An earlier version of this page hosted an article which stated that Israel had, without warning, opened a number of dams, which had resulted in a part of Gaza being flooded. This was false. In southern Israel, there are no dams of the type which can be opened.”

Al Jazeera went on, “We apologise for this error. Al Jazeera depends on objective reporting and strives to correct all errors of fact. We are committed to accountability and transparency. We encourage our audience and others to identify and report our mistakes.”

The UK Mail published a correction on its story, Honest Reporting, a news site that reports on bias and accuracy in reporting on “the Arab-Israeli conflict”, noted.

Readers may easily miss the statement from the Mail, iMediaEthics notes. It is not labeled a correction or editor’s note and is buried at the bottom of the Mail‘s report below four photos and squeezed in above the comments section. iMediaEthics has asked the Mail if the newspaper would consider giving the correction more prominence.

“An earlier version of this article stated that Israel had opened river dams in the south of the country, causing flooding in the Gaza strip. In fact, there are no dams in southern Israel and the flooding was caused by rain and drainage issues. We are happy to clarify this.”