Melissa Click Suspended from Univ. of Missouri, Must do Community Service after Protest Incident - iMediaEthics

Melissa Click Suspended from Univ. of Missouri, Must do Community Service after Protest Incident 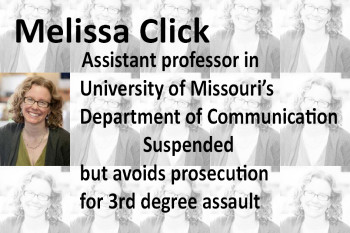 Melissa Click, an assistant professor in the University of Missouri’s Department of Communication, must complete 20 hours of community service and not break the law for a year in order to avoid prosecution for third-degree assault.

Click was charged with third-degree assault over her actions during a November diversity protest on the university campus.

She was videotaped asking for “muscle” to get a student reporter, Mark Schierbecker, “out of here,” even though the protest was taking place in a public space on campus.  Schierbecker “accused Click of grabbing his camera and pushing him while he was making the video,” the Kansas City Star reported.

She was also suspended, with pay, from her position at the university. The university’s communications chief John Fougere told iMediaEthics by e-mail: “Her suspension is paid. I do not have a timeframe at this point.”

“Based on the facts of this case, I believe this disposition to be appropriate,” City Prosecutor Stephen Richey said in a statement, according to NBC News. “This disposition is in keeping with my office’s handling of dozens of similar Municipal cases and adequately serves the interest of justice by ensuring the defendant will not engage in similar conduct.”

“The city prosecutor told me this is fairly standard offer for cases like this,” Schierbecker told the Columbia Tribune. “I thought it was reached in a timely manner. I’m hoping that Melissa Click can hold to her bargain.”

Pam Henrickson, chair of the university’s Board of Curators, announced in a statement Jan. 27 Click’s suspension from the university “pending further investigation.”

“The Board of Curators directs the General Counsel, or outside counsel selected by General Counsel, to immediately conduct an investigation and collaborate with the city attorney and promptly report back to the Board so it may determine whether additional discipline is appropriate,” Henrickson’s statement explained.

Melissa Click Suspended from Univ. of Missouri, Must do Community Service after Protest Incident