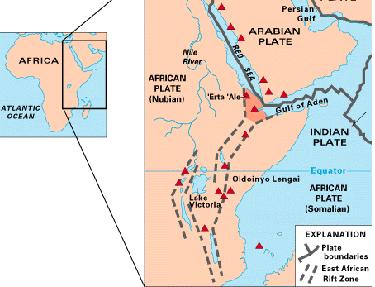 This map shows the East African rift area. (Image courtesy of the USGS)

A spate of science coverage last week on a crack in Africa’s Great Rift Valley exemplifies one particular kind of sloppy reporting–covering news that isn’t.

Charlie Petit–one of the writers at MIT’s Knight Science Journalism Tracker–breaks down the issue in a November 4 post. He says many publishers who covered the new discovery (distributed in a University of Rochester press release) told the “the easy (no news) story, not the real (new news) one.”

The real news is that a fissure, which opened up in 2006, has finally been conclusively identified. It’s just as researchers originally thought; the split is in fact a part of the larger forces scientists already know to be at work expanding the Great Rift Valley into what they expect will eventually become a sea or even an ocean basin, according to Petit.

But news coverage seemed to associate this discovery with the conclusion that Africa is splitting, implying that this science proves the hypothesis. In reality, the understanding that Africa will likely split is nothing new, and the identification of this particular fissure doesn’t prove it. Even the fissure itself is not new–only the knowledge that it is indeed a part of the big splitting-picture.

The news coverage that Petit highlights–in MSNBC and the AFP–doesn’t completely mangle the science, but he is right that headlines like “Giant crack in Africa may create a new ocean,” and “Volcanic eruptions may split Africa,” focus much too heavily on some very old news. It’s unfortunate, he argues, because the actual scientific advance here is interesting. The make up of the rift is strikingly like that of mid-ocean ridges.

“It is the equivalent of spanking new ocean crust forming in Africa’s interior. That’s pretty interesting,” Petit writes. “But headline (and press release) writers, dealing with a public that has little reason to know that Africa’s sundering is nothing new, go with the new lineament as key evidence that the continent is splitting at all.”

It is easy for readers to be confused in this coverage about what exactly researchers were looking at, what they knew already, and what they found out.

In the MSNBC piece, the lede reads,

A 35-mile rift in the desert of Ethiopia will likely become a new ocean eventually, researchers now confirm.

The crack, 20 feet wide in spots, opened in 2005 and some geologists believed then that it would spawn a new ocean. But that view was controversial, and the rift had not been well studied.

This wording almost makes it sound like scientists were unsure if Africa was splitting at all. This is misleading.

The AFP does an even worse job mangling the real discovery, writing “Volcanic activity may split the African continent in two owing to a recent geological crack in northeastern Ethiopia, researchers said on Tuesday.” Again, as Petit points out, this is misleading, as the discovery in question was not that Africa is splitting; scientists already knew that. Yet somehow the AFP makes it the cornerstone of their story.

Unfortunately, it looks like a lot of this confusion and the non-newsiness of these stories can be traced back to the press release, which itself reads

African Desert Rift Confirmed As New Ocean In The Making

In 2005, a gigantic, 35-mile-long rift broke open the desert ground in Ethiopia. At the time, some geologists believed the rift was the beginning of a new ocean as two parts of the African continent pulled apart, but the claim was controversial.

Even here it is hard to tell if the takeaway message is that this fissure has been confirmed as a part of a known continental split, or if the whole idea of a split is new. No wonder media were confused.

“One must feel some sympathy,” Petit writes. “It’s much the same as space writers, and editors, who hail almost every new planet as evidence of abundant life in the universe, or every new affirmation of water on Mars as a sign life may have evolved there.”

At least, in burying some nice news under a lot of non-news, MSNBC and the AFP did a little better than others, who according to Petit, used the geometry of the fissure to inspire some more prurient takes on the story like the Register’s “Volcanic African ‘unzipping’ could see continent divided. Mighty cleft suddenly appears in ‘mega dyke intrusion.’”