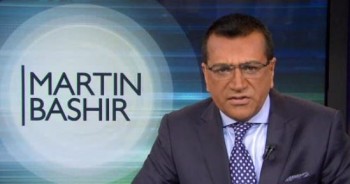 On Nov. 15, Bashir called Palin a “world class idiot” over her comments at Iowa’s Faith and Freedom Coalition comparing the effect of U.S. debt and loans from China to  slavery. Palin had said:

“Our free stuff today is being paid for by taking money from our children, and borrowing from China. When that note comes due — and this isn’t racist, so try it. Try it anyway. This isn’t racist. But it’s going to be like slavery when that note is due.”

In response, Bashir said that Palin is the United States’ “resident dunce” who has a “long-diseased mind.” He told a story about an 18th-century slave-owner named Thomas Thistlewood who would punish slaves with flogging as well as having slaves defecating and urinating in other slaves’ mouths. Then he said Palin “confirms if anyone truly qualified for a dose of discipline from Thomas Thistlewood, she would be the outstanding candidate.” (Mediaite has video of Bashir’s comments.)

On the Nov. 18 episode of his MSNBC show, Bashir apologized, admitted his comments were “deeply offensive,” and distanced MSNBC from his comments. He said:

“I wanted to take this opportunity to say sorry to Mrs. Palin, and to also offer an unreserved apology to her friends and family, her supporters, our viewers, and anyone who may have heard what I said. My words were wholly unacceptable. They were neither accurate, nor fair. They were unworthy of anyone who would claim to have an interest in politics, and they have brought shame upon my friends and colleagues at this network, none of whom were responsible for the things that I said and at a place where we try every day to elevate political discourse and to focus on issues that matter to all of us.”

He added that he is “deeply sorry” for his comments. “Upon reflection, I so wish that I had been more thoughtful, more considerate, more compassionate. but I was not. And what I said is now a matter of public record,” he commented.

See video of his full apology below.

The Washington Post’s Erik Wemple characterized Bashir’s apology as “so contrite, so complete that it sounded as if his job was riding on it.”

In his new-ish role as media reporter at Fox News, Howard Kurtz reminded readers of MSNBC’s 2011 weeklong suspension of Ed Schultz over his comment that Laura Ingraham is a “right-wing slut.”

MSNBC also suspended Alec Baldwin this past week after his comments to a New York Post photographer.  TMZ’s video transcript of Baldwin’s remarks indicate he called the photographer a “c**ks**king f*g,” but Baldwin claims he said “c**ks**king fathead.”

iMediaEthics has written to MSNBC to ask what prompted Bashir’s change of heart and if anyone vetted his original comments about Palin before broadcast. We will update with any response.