No Apologies, NYT 'Readers misread my point,' says Bill Keller RE His Adams 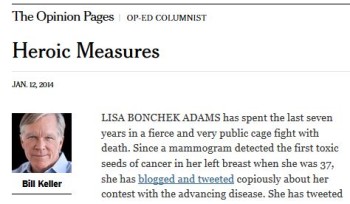 As iMediaEthics wrote earlier today, Keller was criticized for his column about Adams which originally wrongly stated the number of children Adams has. Adams tweeted numerous times about his column writing that she was “mischaracterized” and that Keller failed to “do research.” Separately, Keller’s wife, Emma Keller, a columnist at The Guardian, had previously written about Adams and her post, which also was heavily criticized, has been unpublished. Emma Keller admitted that she had quoted from private messages with Adams and didn’t let Adams know she was writing about her. The Guardian told iMediaEthics that the article didn’t meet “the Guardian editorial code” and that its readers editor looked into the post.

Public editor Margaret Sullivan responded quickly to the criticism of Keller’s post,blogging today about the column and noting that she doesn’t say “whether or not I agree with columnists, or whether or not I like their columns.”

That said, she did acknowledge “there are issues here of tone and sensitivity” given that parts of Keller’s column flew in the face of Adams’ wishes. “For example, when Ms. Adams has made it so abundantly clear in her own work that she objects to the use of fighting metaphors in describing experiences with cancer, it was regrettable to use them throughout a column about her, starting with the first sentence,” Sullivan wrote. “It suggests that Mr. Keller didn’t make a full effort to understand the point of view of the person he’s writing about on the very big and public stage that is The Times.” (Adams had tweeted in response to Keller’s column that she has “written extensively on my hatred of war metaphors and cancer.”

iMediaEthics wondered if indeed Keller used the fighing metaphor again in his defense to Sullivan saying ” I wish every cancer victim could have those options – to fight with all the resources of medicine, or not.” Keller can’t get away from the suggestion of fighting even in the face of criticism.

Sullivan’s column, “Readers Lash Out About Bill Keller’s Column on a Woman with Cancer,” featured a response from Keller. Keller said in part:

“Some of the reaction (especially on Twitter, which as a medium encourages reflexes rather than reflection) has been raw, and some (especially in comments posted to the article online, where there is space for nuance) has been thoughtful and valuable. I tried to be clear in the column that I respect Lisa Adams’s choices, and I meant it.”

He added: “I think some readers have misread my point, and some – the most vociferous – seem to believe that anything short of an unqualified “right on, Lisa!” is inhumane or sacrilegious. But I’ve heard from readers who understood the point and found it worth grappling with.”

When asked why he wrote about Adams, given his wife’s previous Guardian post, Keller said it was because “Emma and I had different angles on the subject.” He also defended his wife’s comments and distanced her from the headline, saying:

“Except for the snarky headline, which Emma didn’t write, I thought she wrote a sensitive and provocative piece, clearly aimed at stimulating a reader discussion of this hyper-transparent world we inhabit.”

He went on: “I don’t think either of the Keller pieces was a ‘slam’ of Lisa Adams or her choices.”