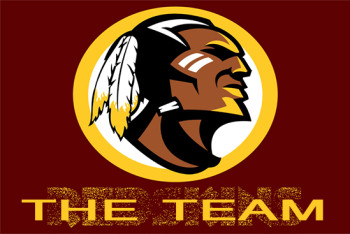 National Public Radio said it won’t ban the name of the NFL team the Washington Redskins from broadcasts or publication. However, the network recommends that its staffers be careful with the use of the team’s name, because it is offensive.

In an Oct. 10 memo published on the network’s ethics handbook site, NPR explained its new position on the term and said that it was inappropriate for NPR to “become part of the story” by deciding whether it should ban the name. “NPR News does not plan to prohibit the use of the full team name,” the memo said. “The team’s name is the name and our job is to report on the world as it is, not to take a position or become part of the story.”

NPR side-stepped issuing a full-out ban on the term “Redskins,” by instead pointing its journalists toward its stance on offensive terms. The policy calls for staff to be avoid using “language that may be offensive.”

The new guidance suggested ways staff can substitute other words or rephrase reporting around the team’s name. But, NPR advised that clarity is more important that avoiding the term.  The standards say:

“As a network, we do not have much occasion to report on this club. When we do, we can usually refer to it simply as ‘Washington’ or ‘the team’ once we’ve established that we’re talking about the city’s NFL franchise. This line, for example, was on our air after the firing of Washington’s coach: ‘Last year the Redskins made the playoffs, this year they were only 3-13, Mike Shanahan was held to account.’ We could have said: ‘Last year Washington made the playoffs, this year the team was only 3-13, Mike Shanahan was held to account.’

In August, the Washington Post editorial board announced it would no longer call the team by its name because the name is “insulting.”

The next month, the New York Daily News said it was joining the ban.

In June, the Seattle Times said it would stop using the name Redskins in coverage of the team.

Last year, the Richmond Free Press, Slate, The New Republic and Mother Jones all said they were done with the term as well.

In 2012, the Kansas City Star disclosed its “longtime policy” against naming the team, given that it is a “racial epithet, plain and simple.”

Despite numerous news outlets speaking out against the name, the Redskins’ owner Dan Snyder maintains the team will keep its name.