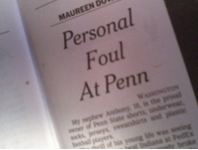 The New York Times mis-identified the University of Pennsylvania as the school currently in the news for accusations of rape and a cover-up by using the wrong abbreviation for the school, the Associated Press reported.

Last week, Penn State University’s former assistant football coach Jerry Sandusky was arrested and “charged with sexually abusing eight boys over a 15-year span.”  The New York Times reported that according to a grand jury, university president Graham Spanier and head football coach Joe Paterno both knew of accusations of assault against Sandusky but didn’t go to the police.  Penn State’s board of trustees fired both Paterno and Spanier on Nov. 9.

However, “some print editions” of the Nov. 9 New York Times wrongly identified the school in question as Penn – not Penn State.  The University of Pennsylvania — not Penn State University — goes by the nickname Penn.

The error was made in Maureen Dowd’s column, titled to “Personal Foul at Penn.”  Dowd’s final paragraph also comments on “Penn scoundrels.”  According to the Associated Press, University of Pennsylvania students are calling for an apology from Dowd, claiming that Dowd’s column “is trashing our reputation” and “confusing us with the brouhaha at Penn State.”

The Nov. 8 op-ed has since been corrected and the headline now reads “Personal Foul at Penn State.”  The correction reads “An earlier version of this column used the wrong shorthand in the headline and the final paragraph for Pennsylvania State University. It is Penn State, not Penn.”

Mediaite’s Tommy Christopher slammed coverage of the investigation and accusations against Sandusky, noting “Dear Media, Penn State is not a ‘Sex Scandal,’ it’s a Rape Scandal.”

Christopher questioned media outlets describing “this story as a ‘sex scandal,'” noting that since Sandusky is accused of raping minor-aged boys, the media should identify this scandal as rape.  He also criticized identifying this as a “sex abuse scandal” because he wrote that “‘abuse’ has a softness to it” and is “wholly insufficient.” Instead, Christopher advocated calling Sandusky’s alleged actions “assaults.”

Paterno’s statement on being fired claimed that “a tragedy occurred… this is a tragedy.”  And the media inexplicably has followed suit labeling the circumstances as tragic instead of identifying the alleged acts as crimes, StinkyJournalism notes.

iMediaEthics’ view: describing sex acts with children as a tragedy draws attention away from the fact that an adult male is being accused of committing vile crimes and others chose to ignore it.