NYTimes Public Editor on Gaza Photo Caption: 'Could Have Been Clearer'

NYTimes Public Editor on Gaza Photo Caption: ‘Could Have Been Clearer’ 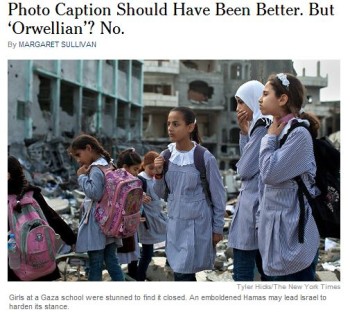 New York Times public editor Margaret Sullivan blogged that the caption accompanying the Times’ photo of Gaza school girls “could have been clearer and more informative” but wasn’t “Orwellian,” as the Nation‘s Greg Mitchell suggested.

“Girls at a Gaza school were stunned to find it closed. An emboldened Hamas may lead Israel to harden its stance.”

While Mitchell said the Times should have reported that “the school was completely destroyed by an Israeli air strike,” Sullivan reported that the photographer, Tyler Hicks, said the “building was still standing but not safe or in any condition to be occupied by students.”

In a follow-up, Mitchell agreed with Sullivan’s denial that the photo was biased.  He added that he didn’t say the photo was “Orwellian” but just asked it “as a question, not an outright claim.”

NYTimes Public Editor on Gaza Photo Caption: ‘Could Have Been Clearer’