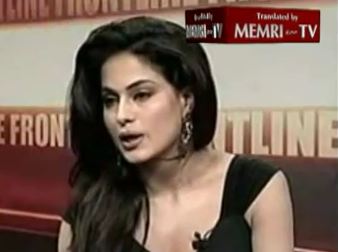 According to the Hollywood Reporter, the magazine added a tattoo with “the initials of Pakistan’s Inter-Services Intelligence Agency (ISI) initials on her arm, a hand grenade in her hand with the pin in her mouth.”  BBC News reported that her lawyer said “there was no nudity” and “she had some clothes on” during the photoshoot, but that the magazine doctored the photos to make her appear nude. Further, he added that the magazine showed her different photos to approve for the cover.

HM’s editor, however, claims that Malik suggested the ISI tattoo, according to the BBC.

Malik is also asking for about $2 million from the magazine and for the magazine to take the pictures down, according to the Hollywood Reporter.