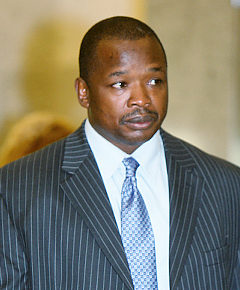 Dirty ex-cop Jerry Bowen was on the run after allegedly killing his girlfriend. When he was caught, the Daily News updated the lede but forgot to update the headline and the bottom half of the story.

Newspapers enter murky waters when they try to update news stories as they come in. A recent case backs up my recent argument that media outlets should adopt a Wiki-style log of edits to stories, so that readers know when information has changed.

The New York Daily News ran an article about Jerry Bowens, an ex-cop suspected of killing his girlfriend and wounding another woman who is now on the run from authorities.

The confusion starts with the lede which says (emphasis mine), “A dirty ex-NYPD drug cop was in police custody Monday morning after he allegedly gunned down his girlfriend and wounded her pal inside a plush Brooklyn condo on Sunday. Jerry Bowens, 43, was considered armed and dangerous by police, who nabbed him before he could hurt someone else or himself.”

Further down the article says, “Cops briefly believed Bowens had bolted to Donofrio’s apartment on 70th St. in Bensonhurst after the shootings and barricaded himself inside…The 5-foot-10, 215-pound Bowens was last seen driving a 2009 Gray Toyota Camry with New York plate EHN5229. He also has a black Hummer and a GMC Denali.”

Which is it? Was he caught or is he on the run? This articles showcases the perils of updating stories without labeling the updates seperately. Of course it’s important to update as new information comes in, but in reporters’ haste to do so, they often lose consistency.

I wrote to the reporter from the NY Daily News, Bill Hutchinson. He wrote the original report, which was later updated by other writers. In an email, he said, “I filed earlier pieces for the newspaper and Website at about 1 a.m., when Bowens was still on the loose. Someone else updated the Web piece when Bowens was nabbed at 6 a.m. I’m not sure why the rewrite failed to maintain consistency throughout the narrative. I can only assume the writer was in such a rush to top the Web version with the breaking news, they didn’t have time to check the bottom.”

It is imperative that these updates be made accurately. I have requested that a correction be posted to the article.