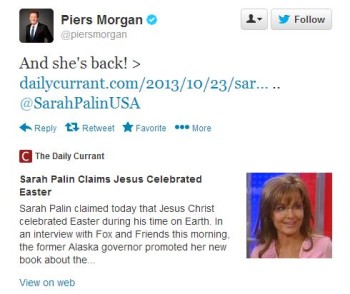 CNN’s Morgan tweeted a link to an article that mocked Sarah Palin without saying it was satire. He was quickly accused of being tricked by the satire story and unfairly “trashing” Sarah Palin.

Morgan soon denied he was hoaxed. He tweet that he knew the story was satire just minutes after sharing the Daily Currant satire story. However, Breitbart News and Palin herself criticized Morgan for his original Oct. 24 tweet.

The link goes to a Daily Currant satire story titled, “Sarah Palin Claims Jesus Celebrated Easter.”  The joke as that Palin didn’t know that Easter, which celebrates Jesus’ resurrection from death, couldn’t have included Jesus himself as a celebrant. With this in mind, the story stated Palin said in part:

A few minutes after he tweeted the link to the Daily Currant story, Morgan said he knew it was satire. He also tweeted to a Breitbart News story about his Palin tweet, which reported, “Piers Morgan spreads fake story trashing Palin.”

Palin then responded to Morgan tweeting the satire story, by posting a picture on her Facebook page of her with a dead bear with the message, “Piers: Kind of busy right now.”

She captioned the photo with a link to the Breitbart News story and commenting:

“Oh dear Piers, thank you so much for all your invitations to appear on your shambolic show, including the adoring message you sent. But is it still any wonder why I’ve politely responded that I’m too busy doing, um, er… pretty much anything to accept the invite? (At least I didn’t tell you to “get stuffed”.) And to all our British friends: we ask, what did your friends across the pond ever do to you to deserve your Piers?”